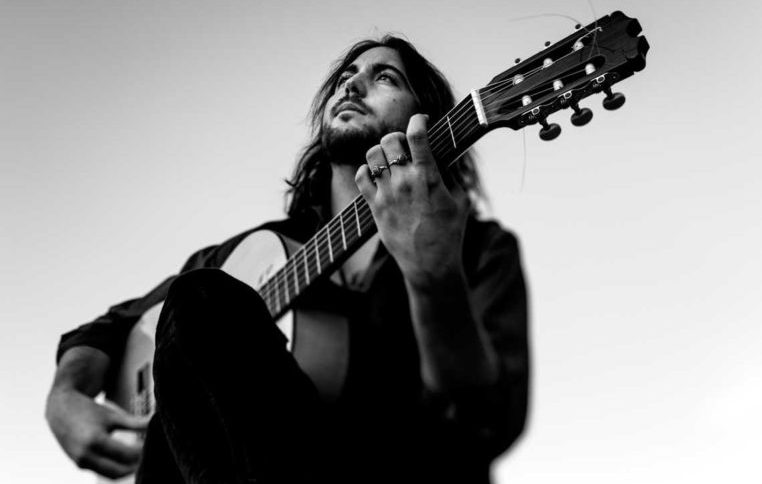 ##Born in Murcia and growing up in Tangier, ‘Paco Soto’ is a renowned artist who manages to build bridges between Arab and Western musical traditions through his flamenco guitar, which is also closely linked to the harmonic influences of jazz.

After releasing his debut album in 2017 ‘Vida’, he comes to Valencia present his new album ‘Dos Mares’ a very successful album where the artist finds his voice, a very flamenco album and at the same time very innovative, full of references to Arab music and with artists like Duquende, David de Jacoba, Jorge Pardo, Javier Colina, Juan Antonio Salazar, Hesham Essam … and who consecrate him as one of the new exponents of this art.

He won the Alcobendas ‘Young Talents’ Award for best guitarist in 2018 and the ‘Flamenco en Ruta’ 2019 from the IEA. He has his own group, Paco Soto Sextet, with whom he has performed in cities such as New York, Barcelona, Madrid, Amsterdam and Brussels, in emblematic halls such as the New York Cervantes Institute or the Kölner Philarmonic, where he was the headliner alongside artists such as Diego el Cigala.

During his career he has collaborated with flamenco and jazz artists such as Duquende, José Soto ‘Sorderita’, Montse Cortés, Jorge Pardo, Josemi Carmona, Antonio Canales, Javier Colina, Chano Dominguez, Guadiana, Juan José Suárez ‘Paquete’, and a long list of others.

24/7 VALENCIA: 1. You were born in Spain but grew up in Morocco. What are your memories of that time?

PACO SOTO: For me to have grown up in Morocco was, of course, a radical change in my way of seeing life and the world and music. I was only a child from a small pueblo in Murcia in Spain and that little mundo was all I knew up until then. So, to move to Morocco opened me up to a world that was completely new and distinctive as well. Generally, when you move to another country, you are also changing your notion of time… because each country has its own understanding of what time is.

2. Does flamenco have more in common with Arabic music than with Western music?
El flamenco is a mixture of many types of music. It does have a little bit of Western influence but it has much more of an Arabic influence. The cadence in flamenco is the same in Arabic music and Sephardic music. Ultimately, it is the African influence. In the end, I mean all of Africa…

As an ethnic music, flamenco has influences from Hungary, the Gypsies, India, the rhythms of Africa, the Moors who lived in Spain and a few Western influences too. Most of all, you will find in el cante of flamenco the quarter-tones of Arabic singing and the North African way they play some notes on violins. This is what gives flamenco its distinctive sound. With all of these special influences, flamenco is in the zone where other music does not go…

3. What does Paco de Lucia mean to you?
When I was little, Paco de Lucia was somebody that made me discover what I wanted to be. I had never ever fallen in love with music that way before. His music didn’t just own me, it enslaved me. I’m an atheist yet Paco de Lucia is like God to me. I grew up in a Christian family in a Muslim country but had never believed in anything…until I started to listen to Paco de Lucia’s music. Paco de Lucia was the Dios I had been missing in my life.

4. You have travelled the world. How does the public compare in Asia and America regarding playing your music live?
It’s true that the public may react in a different way but the sort of music I play, fortunately, has a universal element…so it reaches all cultures. Some audiences may be more enthusiastic than others but it does not mean that the music does not reach the seemingly more restrained audiences. I have been fortunate to have played in many countries like China, Japan and the United States too. In the end, wherever you are in the world, the public is sensitive to music and the feelings that are transmitted and experienced.

5. What have you learned most from your travels?
What i have most learned from travelling is empathy. It’s because you learn about different ways of life and different places and customs too. So, these experiences help you to put yourself in other people’s shoes. You also end up respecting the differences within your own culture. Meeting many people and some with distinctive approaches to life and trying to understand them too, it all helps create empathy… which is a good goal to have in life in the long-term.

6. What is flamenco for you?
I believe that it has been said before …but for me flamenco is a way of life. It’s a bohemian and ‘disfrutona’ (enjoyable) way of life. You like to enjoy life; you like to feel life, even experiencing the pena of life in full (the pain). I think flamenco is feeling everything that life throws at you… and intensely too.

7. Could you tell us something about your favourite live and studio guitars…?
The truth is that I’m a guitarist who has no idea about guitars, really. I’ve only got two guitars and nothing more. I would say that I have only had six guitars in my whole life. The others I have sold and I’ve stayed with the two guitars that I like the most, the ones I find most pleasing to play.

I didn’t take note of the type of wood or anything like that; I bought those guitars because I enjoyed playing them. For playing live, I like to play high-tension strings because I play with more force on stage because I’m more nervy then. At home, I play a guitar with medium-tension strings to accompany the way I play…

8. Could you take us through the songs of your new album, ‘Dos Mares’?
I can tell you that this album is a reflection of and influenced by my childhood, growing up in Morocco.

DOS MARES is about the seas of the Mediterranean and the Atlantic.

CANDELA is about a bar or cueva in Madrid, where i would go and see all the gypsies meeting up and singing flamenco until seven in the morning. I would play the guitar along with them… and learn a little bit from them too.

TÁNGER is the city where I grew up…

EL MIRLO is a beach in Tarifa, which is the playa that is nearest to Marruecos and lies on the Strait of Gibraltar facing Morocco.

LA BÚSQUEDA is my interminable search…for making my music a little better each day.

TRES DIAS are tanguillos that took a very long time to compose. There is a lot of Arabic influence, which is a sound I wanted reflected on the album as a whole, due to me growing up in Morocco.

CONVERSACIONES CON RAMÓN EL PORTUGÉS is a homage i wanted to give to ‘Ramón El Portugés’ because he is an incredible cantaor and I love him, he’s like my abuelo from Madrid. I wanted to give him this as a present… because he has given me so much, from many conversations and with a kindness that will stay with me for life.

9. What are your musical plans for 2021?
My hopes for 2021 are basically to carry on playing live. ¡Ojala! Let’s see how long COVID is going to last. If it carries on, let’s see if the government will be less restrictive for culture in general because I think they have done an awful job so far. Concerts are some of the safest places to play since measures have been taken. So, the government should be encouraging more concerts not less and stop taking the piss out of us all…