You are here: Home  /  Editorial  /  Sports  /  VALENCIA FOOTBALL…YOUNGSTERS HOLDING THEIR OWN
Editorial 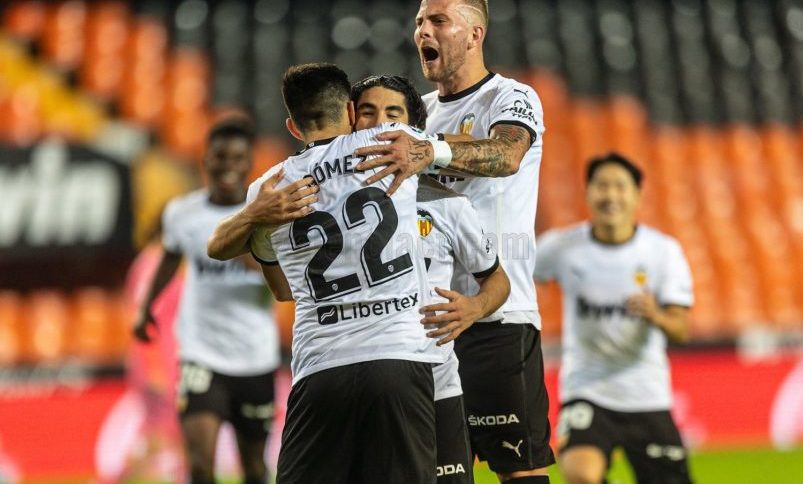 VALENCIA FOOTBALL…YOUNGSTERS HOLDING THEIR OWN

##As the year 2020 nears a close, Valencia supporters and the owners continue to be at loggerheads with each other off the field.

However, on the pitch the youthful nature of the side gains experience from every match. Numerous players are showing maturity beyond their years, which bodes well for the future.
Real Madrid were a recent visitor to the Mestalla and they found the unbridled enthusiasm of Valencia too much to handle. The bizarre match saw Carlos Soler miss a penalty, but still manage a hat-trick of spot kicks… and Sergio Ramos lose the plot as the team from the capital crashed to a 4-1 defeat.

Things looked good for Madrid as the first half got into full swing when Benzema gave the visitors the lead with a swirling shot, from outside the box, that evaded Jaume.
Twelve minutes later, Valencia were on level terms. A Gayà cross struck Lucas Vázquez on the arm and the referee awarded a penalty. After the standard VAR revue concurred with the man in black, Soler stepped up to take the kick.

His effort was well saved by Courtois but came straight back to the Valencia midfielder. Unbalanced, he put his effort against the post, only for Yunus Musah to convert at the third time of asking for Los Che. However, replays showed that Musah had encroached into the area at the time of the official spot kick so the penalty was ordered to be retaken. This time Soler made no mistake, and levelled the score against the run of play.

Just before the interval, Valencia took an unlikely lead. A cross into the box led to a miskick by Varane that curled up and over the advancing Courtois and inched over the line before either of the Madrid duo could intercept it.

Valencia extended their lead ten minutes into the second half when Soler converted another penalty, this time after Marcelo had bundled Maxi Gómez over inside the six-yard box.
Madrid’s humiliation was complete just after the hour mark when Sergio Ramos inexplicably punched the ball away from Musah, for no reason, when there seemed to be little danger.
Courtois once again went the right way, but for the third time Soler’s penalty was placed near enough to the goal post to elude the Belgian stopper’s outstretched hand.

The result was vindication that Valencia had a young team of potential talent that could play against the best teams in the world. Seven of the team that started the game are 25 or under, and Daniel Wass was the oldest player at 31.

With experience comes consistency, and currently that is what this youthful team is lacking. This manifests itself during most of the games, when some of the decision- making is questionable.

The draw against Alaves in the Basque country after the international break was testament to that. Like so many of Valencia’s trips on the road this season it was a game of two halves. In the first period, Los Che looked disinterested and haphazard. A goal down in two minutes after Navarro lost his marker to shoot home at the near post from a Lucas Pérez corner, it seemed like it could be another pointless day away from the Mestalla.

Soon after Guillamón made a clumsy challenge on the goal scorer inside the box that gave the referee no option but to give a penalty. The former Arsenal star Lucas Pérez made no mistake and Alaves went into the break looking very comfortable.

The second half saw a resurgent Valencia and the introduction of Manu Vallejo kick started the visitor’s comeback. Neat interactive play between Soler and Gameiro resulted in the substitute passing the ball into an open goal to reduce the deficit.

Valencia levelled twelve minutes from time with a wonderful set piece. Wass and Soler both sat over a free kick and toyed with Alaves as to who would take it. Soler eventually curled in a wicked cross straight into the path of Hugo Guillamón. The centre half made amends for his penalty error by firing a bullet-like header past the Alaves goalkeeper.
The visitors had a wonderful chance to clinch all three points at the end, but Gameiro ballooned the ball over the net with only the goalkeeper to beat.

The match summed up Valencia’s season so far to a tee. At times, sublime… but also at times quite ridiculous. Still, a point in Vitoria is no mean achievement and Alaves franked the form by winning at Real Madrid next time out.

The same weekend Valencia played hosts to the other major Madrid club, Atlético. Kondogbia arrived back at the Mestalla and had some strong words to say about the owners in the press, prior to the match. It was not until midway through the second half that the former Valencia midfielder entered the game, and by that time the match looked destined for a goalless draw.

Unfortunately, with time running out, a low cross from Carrasco somehow found its way to the back post and pinged against Lato facing his own goal. The ball then hit the post before nestling behind Jaume’s line.

It was a cruel blow for Valencia who had fought hard and strong against a physical side that display all the characteristics of their streetwise manager Diego Simone.

Atlético, along with Real Sociedad and Sevilla could well be the teams to grapple the title away from the big two, Real Madrid and Barcelona this season. La Liga is now like the Championship in England, a slugfest in which every team can beat each other on any given day.

Levante UD continue to flatter to deceive, and are fast becoming the draw specialists. Their last four games against Granada, Alaves, Elche and Valladolid have all ended with the same result, a 1-1 score draw.

This even keel has left them flirting with the relegation spots, and a win thrown into a mix of all these draws in the next cluster of matches would make everyone in the North side of the city feel more relaxed about their current league standing.