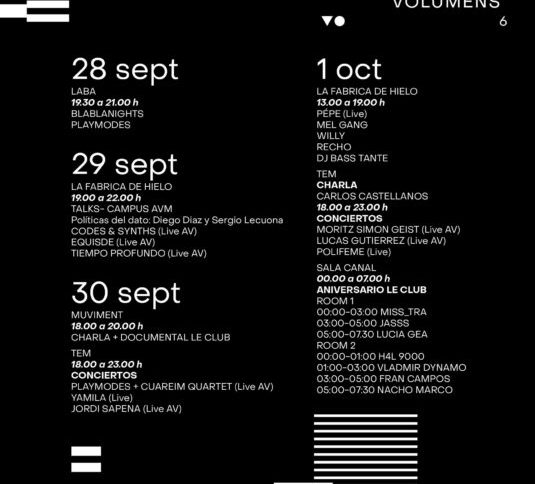 ‘VOLUMENS’ FESTIVAL IN VALENCIA FROM SEPTEMBER 28 TO OCTOBER 1!

The sixth edition of ‘Volumens’ festival (Valencia) kicks off this Wednesday with a masterclass by Playmodes sound researcher Santi Vilanova.The masterclass will kick off four days in which València will be filled with culture and avant-garde music linked to technology. VOlumens will be held from 28 September to 1 October at LABA València, Teatre El Musical, La Fábrica de Hielo, Muviment and Sala Canal, which will host the closing party to commemorate the 22nd anniversary of Le Club.

VOlumens, the international festival of art, science, technology and music in Valencia, begins this Wednesday 28 September at 19:30 h. with a session of the BLABLANIGHTS Cycle at LABA València. Santi Vilanova will give a masterclass on experimentation and sound research as CEO Sound Research of Playmodes, an audiovisual research studio that will perform at the festival on 30 September together with the string quartet Cuareim Quartet at the Teatre El Musical. The BLABLANIGHTS session is free with prior registration by contacting contact@labavalencia.net.

The Cabanyal theatre will be the stage for the artistic avant-garde as it will host, during the evenings of 30 September and 1 October, the future of electronic music with the robotic instruments of Moritz Simon Geist, the ambient music of Jordi Sapena, the hallucinatory powers of Yamila’s music, the rhythms of unconventional devices of Polifeme or the language of the colourful and chaotic metaphysics of the Argentine digital artist Lucas Gutiérrez, together with the aforementioned Playmodes + Cuareim Quartet.

In addition, on Saturday 1 October, before the performances begin, Carlos Castellanos, an artist awarded the first AR(t)IBMCP Artistic Residency, organised together with the Vice-Rectorate for Arts, Science, Technology and Society and the Cultural Action Office of the Universitat Politècnica de València, will give a talk about his residency at the Institute of Molecular and Cellular Biology of Plants, where he is creating a work that presents a dialogue between plants and artificial intelligence. Plants have been genetically modified to trigger observable morphological changes when subjected to environmental stress, while AI recognises these changes and responds with sound and modifications to the plants’ environment. This talk will be free of charge until full capacity is reached.

Tickets to attend the performances at the TEM can be purchased at www.volumens.es at a price of 12 euros each day or a voucher for both days for 20 euros.

Another venue located in the city’s seaside district is La Fábrica de Hielo, which will host live performances and DJ sessions on 29 September and 1 October, as well as a talk organised by the Master’s in Visual Arts and Multimedia of the Universitat Politècnica de València, “Data, science and artistic devices”. Admission for both days is free and free of charge.

Returning to the city centre and as a warm-up to the remembrance of one of the most important clubs in Valencia, on 30 September Muviment will host the screening of the documentary on the closure of Le Club, “The Last Dance”. After the film, we will give way to a pleasant and relaxed debate with journalists, DJs and promoters of the Valencian nightlife. Free entrance until full capacity is reached.

Le Club is celebrating its 22nd anniversary this year and VOlumens will celebrate the occasion at its closing party, which will take place at Sala Canal on Saturday 1 October with artists such as JASSS, Miss_Tra, Lucía Gea and Sergi Palau, who will share the night and decks with the legendary club’s resident DJs: Vladimir Dynamo, H4L 9000, Nacho Marco and Fran Campos. Tickets for the closing party at Sala Canal can be purchased at www.volumens.es for €15.