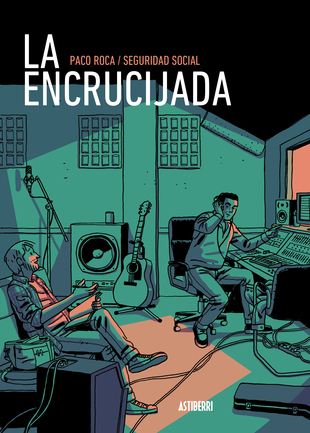 ##24/7 VALENCIA: What is the concept of the comic book & album ‘La Encrucijada’

PACO ROCA: It mostly came about because of my friendship with José Manuel Casañ of the band ‘Seguridad Social’. For my part, it was my enthusiasm to learn more about the world of music and how musicians can make a living from their passion.

Normally, when I do a comic, it is to learn about subjects that interest me. This also includes the theme of how difficult it is for comic book artists in Spain to live from their art. With the exception of Francisco Ibáñez of ‘Mortadelo y Filemón’ fame, it is rare to find Spanish comic book writers who manage to eke out a respectable living from their art during their working careers.

So, with that in mind for my own career as a comic artist, I wanted to learn from José Manuel’s success as an artist in the world of music for more than 30 years… someone who is still creative to the present day. I wanted to learn how he has managed to maintain his enthusiasm for music and his knack for still writing catchy tunes… after so many years. I wanted to learn how he composes canciones and how he was able to adapt to life & work after the success of such a massive hit like ‘Chiquilla.’ ( NB:’Seguridad Social’ sold over a million records around the world)

All of these concepts interest me, as a way of stimulating my work in the world of comics. To learn more about my art, I like to look & study other disciplines like the cinema of filmmakers and the books of novelists and the albums of musicians.

What is the philosophy behind ‘La Encrucijada’?
Initially, it was going to be a series of illustrated stories to accompany the different genres of music that Jose was investigating like blues, country and la rumba and his own experiences in the rock band ‘Seguridad Social’, for example.

Unlike most comics the philosophy was more the approach of a non-fiction work, a documentary of sorts. The project mutated as time went on. The idea was to make a hybrid, an illustrated history of music. Sometimes, the graphic stories were written before the songs were composed and vice versa.

We decided to combine different graphic styles with different music genres of their day. So, for example, José felt that Peret’s Rumba was the POP of its day in Spain. I therefore then chose the “ Spanish pop” comic book style of the editorial Bruguera…with all the characteristics of those comic book heroes so popular in Spain from the 1950s to the 1980s and beyond.

I ended up including the essence of our many conversations as the narrative that runs throughout the book. It goes back and forth, with the roots of each musical genre being explored, and our mutual experiences of trial and error and growth of sorts in the worlds of music and comic books, respectively.

Essentially, the philosophy was to have a document of sorts about two people passionate about their worlds of music and art and discussing it over many meetings. It’s a dialogue about two disciplines, music and art… and they have “creatividad” as a common factor. We talk about creativity and how if it is possible to live from that process, about the creative industries, about whether fashion influences success and the sacrifices you perhaps have to make to reach a wider audience with your work.

Could you tell us more about your friendship with José of ‘Seguridad Social’ and your favourite memories of this particular collaboration?

We were already friends before this project began but we became better friends once this project was completed. We did it the Spanish way, over lunch! Over many aperitivos, long lunches & ‘sobremesas’ with a Gin Tonic or two…we discussed the project. We met up at least every month at the same restaurant ‘Chez Lyon’ in the centre of Valencia (near Plaza Ayuntamiento) for a number of years. We normally met from about 13h until around 17h… around the time that the restaurant had to kick us out each time!

Over these long lunches, our friendship grew and we learnt more about each other’s work and personality and the project was also fermenting too. We decided to avoid the subject of politics but we did discuss any other subject that came up including philosophy, creativity and history.

As a comic book artist my work is essentially a solitary one, where I tend to cut myself off from the world for a year or so to finish each project. José’s world is a more social one, creating a song may sometimes be solitary but he is soon out there in the world, rehearsing the new tune with his band in the studio or a rehearsal room.

I felt like one of those medieval monks in a monastery, whose life revolves around prayers and illustrating books… and suddenly having José the troubadour invade the monastery and take me off on a different journey! He taught me about another way of creating, more in a team, in the communal space of a recording studio too. As a ‘bon vivant’, he taught me not me to work so hard all the time! His spirit & attitude of “vivir la vida” and that each moment of the day has its time and place for doing things…changed my outlook so as to not be so absorbed in my work, all the time, but still be productive.

Can you tell us something more about the Valencia concert / art show on September 25th?

It’s going to be like a “happening” with Seguridad Social playing songs while I paint to a backdrop on stage and there will be conversations with the public between songs too. Funnily enough, it will be in a converted monastery!

As difficult as these times are for everybody, I plan to release a new comic book ‘Regreso al Edén’ next year. I also hope to continue these types of mini-concerts/ live art shows with the ‘Seguridad Social’ band. As I said before, my life as a comic book artist is so solitary and planned for… that these improvised-type concerts are a breath of fresh air!

To buy the comic book and album: https://www.fnac.es/a1416270/Paco-Roca-La-encrucijada-Comic-Disco