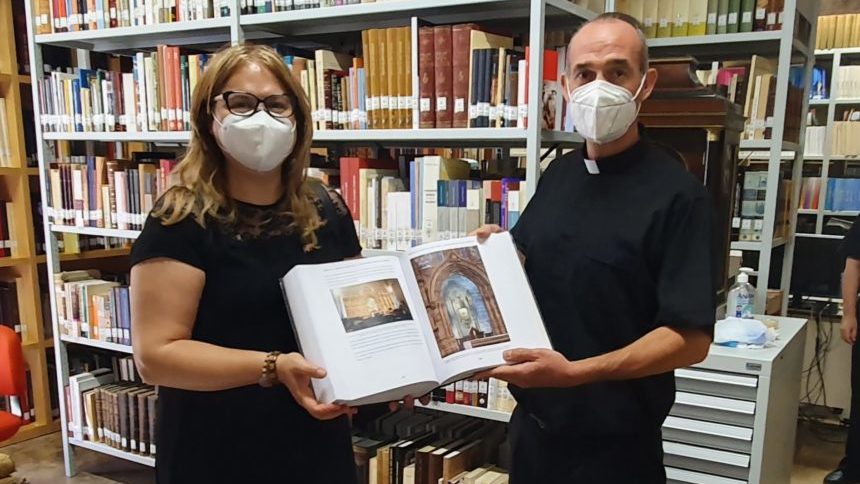 ##The Archives of the Cathedral of Valencia have received a copy of the Doctoral Thesis on the Holy Chalice by Dr. Ana Mafé García.
The prestigious American publishing house ProQuest, based in Ann Arbor (Michigan, United States), has published the entire doctoral thesis, which focuses on the history of the Holy Chalice in Valencia Cathedral.

Only five volumes of this important research work carried out by Dr. Ana Mafé have arrived in Spain. One of these five books will be deposited in the National Library of Spain in Madrid, as confirmed by the author. The institution itself has encouraged her to donate one of these paper copies.

The others have been left at the disposal of Dr. Mafé, who has agreed to take her work to the Cathedral Archive this past Wednesday.

Dr. Ana Mafé has delivered a copy of his doctoral thesis to the Archives of the Cathedral of Valencia so that there is a record of all their research work together.

The general objective of this research is focused on enhancing the value of the Holy Chalice of Valencia as the cup of blessing that Jesus consecrated the night of his last Easter and is kept in the Cathedral of Valencia since 1437.

The first part of the study therefore impresses on the value of the Holy Grail and its proto-history as an essential element in the management of cultural tourism in the provinces of Valencia and Castellón, in the Valencian Community, and in the provinces of Huesca, Zaragoza and Teruel in Aragon.

The research is divided into three parts that develop each of the specific objectives of the investigation; that is, the relevance of the History of Art in cultural tourism; the study of the proto-history of the Holy Grail; and the enhancement of those who are working since 2002 in the consolidation of the Holy Grail Way, in this case, the Cultural Association El Camino del Santo Grial.

Undoubtedly, the greatest contribution of this thesis is the study of the history of the Holy Chalice in Valencia. For the development of the work, a volumetric investigation of the object was carried out, to achieve its definitive scientific cataloguing. Researches were necessary in Rome (Vatican Museums), Jerusalem (Tower of David Museum, Palestinian Archaeological Museum – Rockefeller Foundation and Israel Museum), Cordoba (Archaeological Museum), Faro (Archaeological Museum), Jaca (Diocesan Museum) or London (British Museum), among others, which concluded in the authenticity of the cup of Valencia, known as the Holy Chalice, as the generating object of the universal myth known as the Holy Grail.

This result of the research can be transferred to the social fabric that makes up the Way of the Holy Grail, Route of Knowledge, Way of Peace through the creation of a cultural product from the essence of religious tourism and pilgrimage that vertebrates the Aragonese territory until reaching the Cathedral of Valencia, without forgetting that part of the international journey that would include cities like Jerusalem, Rome, Naples and Troyes, among others.

The American publishing house ProQuest has the largest and most complete collection of dissertations and doctoral theses in the world, which now includes some 90,000 authorized sources, 6 billion digital pages and covers six centuries of history.

This book, which now rests in the Archives of the Cathedral of Valencia, covers more than six years of study dedicated to the Holy Chalice and the scientific methodology – known as Iconology – typical of the academic discipline of Art History.

Part of its content can be found in the book The Holy Grail, published by Editoral Sargantana, which has a second printed edition despite not having been able to make any presentations at specialized fairs.

Mr. Vicente Pons, grateful for this moment, gave Dr. Mafé a copy of the book La Catedral de Valencia (The Cathedral of Valencia). History, Culture and Heritage published by the Royal Academy of Fine Arts of San Carlos of Valencia.

“We hope that the volume deposited in the Archive of the Cathedral of Valencia will serve as an inspiration for many other investigations”, says Dr. Mafé. Likewise, the author of the study hopes that the criticism she receives for her work will add value to the history told by the uninterrupted tradition of more than XVII centuries of our most precious relic, the Holy Chalice of the Lord’s Supper.