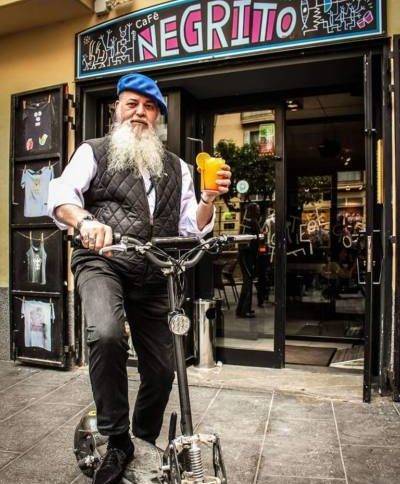 ##It sometimes happens that a bar or a shop or a restaurant becomes so synonymous with its surrounding that it’s hard to separate it from them. The bar and the square become one and the same place. This is certainly the case with the Barrio del Carmen’s Café Negrito and the Plaza of the same name on which it stands. You almost find yourself wondering which came first, the bar or the plaza, and it seems impossible to imagine one of them existing without the other.

In actual fact Plaza Negrito was originally officially christened Plaza de Calatrava, taking the name of the street that crosses it, but to local people it was always Plaza del ‘Negrito’ in reference to the bronze statue of a small boy in the square’s fountain, which had blackened over time. Eventually this became the square’s official name. Installed in 1850, this was the first fountain in Valencia with drinkable water. People, it would seem, have been coming to Plaza Negrito for a quiet drink under the lemon trees for over 150 years.

Also in the square in the corner, where C/ Calatrava enters from La Lonja, is Palacio de Los Lassala, bought from the Marqués of Castellnovo in 1750 by the French family of the same name. It doesn’t look much from the outside but inside, by all accounts, it is a sumptuous mini-palace with an extensive art collection, a famous library of 17,000 antique books and a collection of newspapers from the last three centuries. The house is still the family home of the Lassals and is not open to the public. Had it not been for Cafe Negrito, the plaza would no doubt just have been another unknown dusty corner of the Carmen by now.

When I got to know Negrito in the early ‘90s, unlike many other bars in the Carmen at the time, it didn’t specialise in a particular type of music or punter so it was never intimidatingly cliquey. It was an everyman sort of place, appealing to all types and different ages, where most were made to feel welcome. That’s not to say it has ever lacked in personality, it has always had an artsy feel with its regular exhibitions and trademark artist palette-shaped tables, but never to the extent that you wouldn’t feel part of it. Its always-open French windows allowed people to spill out all over the square, and the doable prices and funky but friendly bar staff meant that, for many, a night  out in the Carmen would always mean at least having one or two in Negrito. The legendary queues for the toilets were not so popular but, hey, you can’t have everything.

Although the ‘Amics del Carmen’ (‘Friends of the Carmen’ neighbourhood group) and the ZAS laws (restrictions for the ‘excessive’ noise) put paid to the French windows and the toilets have vastly improved, the beauty of Negrito is that none of what made it what it was has changed much over the years. In the early evening, you can sit on the terrace amongst the trees listening to the water rippling in the fountain but it’s later on, as a nightspot and meeting point, that it really comes into its own. People say it is a barometer of Valencia night life. If Negrito is empty, you may as well go home because everywhere else will be, too, but if it’s heaving, you know it’s going to be a good night.

Where did it all start?

The 8th of November 1981, just five days after my 20th birthday, so this year we will be celebrating the 39th anniversary of the bar and my 60th birthday.

Has Negrito always been in the same place?

At the beginning, it was just on the other side of the square until the building was declared a ruin by the powers-that-be and pulled down. We had to close but luckily we got the place where we are now. We now also have ‘La Negrita’ next door. We call it the “little sister”.

You must have seen a few things change around here?

In those days the Barrio del Carmen was almost a no-go zone, less people lived around here, and it was frequented by drug dealers and dodgy types and largely avoided by the well-heeled folk. Only ‘los progres’ (political, avant-garde bearded types from the ‘70s and ‘80s) and other outsiders dared to come. It wasn’t a place you passed through during the day. We were an island in the middle of dark, dangerous, dusty narrow streets. It was great!

What do you think of those who bought a house here because they liked the atmosphere and then put up the “Volem Dormir” (“They want to sleep”) signs and complained about the noise?

In some ways they are destroying the area. They came to live in a bohemian neighbourhood because they enjoyed the crazy nightlife and now they want to stop the next generation having fun. For good or for bad, the Carmen is no longer on the outside and has fully integrated as just another part of the city. Much of the feel of before has gone but it’s cleaner and safer, more people live here and there are more services. It’s better looked after.

We’ve always been popular with the actors from the Talia, Olympia and Principal theatres. Some of them have been coming here off and on for years, like Juan Echanove or the members of El Tricicle. The late Carmen Alborch was a regular and Francis Montesinos is also a client. Eduardo ‘Calpurnio’ designed our logo in the ‘90s. I was an art student and we have a lot of friends who are artists, that’s how the exhibitions started, although lately for a number of reasons we haven’t done as many. All customers are special in a way and we get people from all over. There have been times when this place felt like you could have been anywhere in the world with all the different languages spoken. Some of our customers got to know us as Erasmus students or when they were here as language teachers and come back and see us when they are over on holiday.

Thirty nine years is a long time. What’s your secret?

The way you treat people is important. Treat people the right way, be polite and friendly, have good quality products and create an atmosphere that makes people feel welcome both inside and out on the terrace. It’s important to work with good professionals who you enjoy being with and who understand what the place is all about. A lot of our bar staff have been here for more than ten years and we still have good relations with everyone who has worked here over the years.

What are your most popular drinks?

At the moment a lot more people drink beer and less shorts, less gin, whisky or rum, perhaps it’s the recession! I suppose it’s all just a question of what’s in fashion. Valencia has never been a place for cocktails. We’ve always been about beer, Agua de Valencia, cubatas and gin tonics. There have been times when it seems like everyone is drinking rum; at the moment gin is more popular. We also sell quite a few mojitos.

To finish up, how would you describe the life of a Valencia bar owner?

Always changing. Lean periods and periods of success. You need a lot of imagination, enthusiasm and the verve and energy to keep going forward. You need to be adaptable to new ways of doing things and how they are going to affect you and, of course, you need to be prepared to work at it.

David Rhead and José Marín
NB: Photo is not the owner of Café Negrito