You are here: Home  /  Editorial  /  Baleària celebrates 20 years of the high speed revolution in the Balearics
Editorial 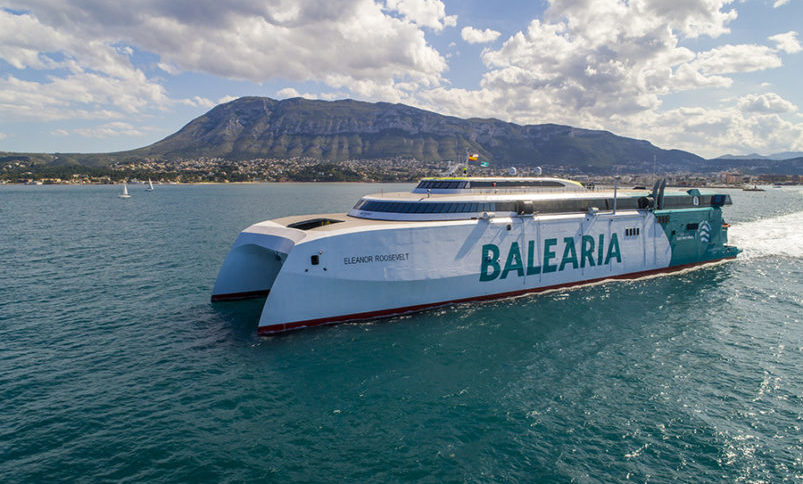 ##The ‘fast ferry Federico García Lorca’ linked for the first time in June 2001 Dénia-Eivissa-Palma at high speed. The ‘Eleanor Roosevelt’ has taken over the route, adding gas navigation and digitalization to the speed. Last June 15th was the 40th anniversary of the first maritime connection between Dénia and Eivissa in 1981.

On June 26, 2001, Baleària’s Federico García Lorca fast ferry made its maiden voyage from Palma to Eivissa. The brand new ship departed at 16:00 hours from Palma with 250 passengers, a third of its capacity, and arrived two hours later at its first destination. The time reduction in the crossing was a revolution in maritime connections to the Balearic Islands and marked the starting point for a young shipping company created on June 20 three years earlier. “It was groundbreaking in terms of speed, comfort and timetables,” recalls the president of Baleària, Adolfo Utor, who adds that “it was also a declaration of intent, with deeds and words, of a company, which, despite its youth, was already committed to the development and welfare of the territories.” With a top speed of 40 knots and 115 metres long, the imposing bow of the Federico García Lorca, with the digitized signature of the famous poet and playwright, was part of the landscape of Denia, Eivissa and Palma until 2013.

The ship was built in the Italian shipyard Rodriquez (in Pietra Ligure), just like its smaller twin, the Ramon Llull, which operates the Dénia-Formentera route. The Lorca, with an investment of 7,200 million pesetas (about 42 million euros), was Baleària’s first newly built vessel. “It was a very important leap in quality and improvement, and it was noticeable in the large influx of people who used our services. We reduced a trip from Denia to Palma from more than eight hours to just five,” recalls its first captain, Francisco Jimenez Vara. In addition, it also facilitated the transport of goods, “which could be at the market first thing in the morning”, he emphasizes.

The arrival of the Lorca prompted many changes in the company, which had started up in 1998. Antonio García, current Director of Business Systems, recalls the challenge of meeting the demand for reservations for a ship with 880 seats: “Online sales did not exist, and we had to expand the Call Centre from 25 to 80 operators, many of whom are still with the company in different departments.” At the time, it was the most technologically advanced ship in the high-speed market, boasting all the amenities and services: comfortable seats, baby changing tables, bar-cafeteria, children’s play area, luggage lockers, access for people with reduced mobility, audiovisual entertainment and an onboard store. “We were ‘casting off’ in our growth as a company, and the Lorca helped us to be stronger, more competitive and to build customer loyalty,” says Cristina Mulet, head of direct sales.

Eleanor Roosevelt’: speed, sustainability and digitization
Two decades later, the most sustainable fast ferry in the Mediterranean, the Eleanor Roosevelt, has taken over as the shipping company’s flagship, ready to continue the revolution. Fast and comfortable as the Lorca, it adds natural gas navigation, less polluting, and the digitization of onboard services.

June is a month of anniversaries for maritime transport in the Balearic Islands. On June 15, 1981, 40 years ago, Isnasa’s Isla de Mallorca made the first maritime connection between Dénia and Eivissa, which meant the reactivation of the commercial activity of the port of Dénia. In 1984, the shipping company Flebasa, belonging to Isnasa, took over the route. And on June 20, 1998, Baleària was created, which continued with the connections, which since 1993 also reached Palma.

Baleària defines itself as a responsible corporate citizen, which has taken on the United Nations Agenda 2030 as the roadmap that guides its activity in the areas of economic, social and environmental sustainability.