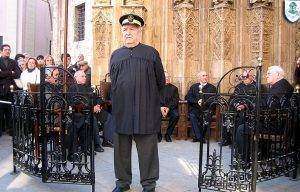 If you are passing through Plaza de la Virgen one Thursday morning, you might come across a group of eight old men in black capes huddled around the door of the cathedral. This is not, as you might think, an octogenarian Batman convention but El Tribunal de les Aigues, one of the oldest functioning legal institutions in the world.

Much as it has done for well over a thousand years, El Tribunal de les Aigues (The Water Court) meets every Thursday at 12 o’clock midday outside the Puerta de los Apostoles to settle disputes between local farmers concerning the seven ‘‘royal water channels’’ which irrigate the fields around Valencia. The eight men are all local farmers themselves, the president of the tribunal and one judge for each of the seven ancient channels, four from the right side of the river Turia (Quart, Mislata, Favara and Rovella) and three from the left (Tormos, Mestalla and Rascanya). In keeping with tradition, each member is democratically elected by the farming community for a period of two years.

These fields around Valencia are traditionally irrigated by a network of irrigation channels controlled by a series of sluice gates. To ensure that water is not wasted and all the fields can be sufficiently irrigated, the timing and quantity of irrigation for each farmer’s field needs to be strictly controlled. This is particularly important in Valencia, where the historically irregular flow of the Turia River has often brought constant swings between drought and flood.

The tribunal has the last word on any disputes and any punishments that need to be handed out. All court business is carried out orally in Valenciano and nothing is ever written down. Whatever the court decides stands, and can not be overturned by any court in the world. The key to the water court’s enduring standing is that decisions are made by a ‘‘people’s court’’ made up of members the farming community itself (and not by some wigged city civil servant) on the basis of fairness, common sense and the common good. No final rulings are ever challenged.

The process is simple: you put your case, the tribunal decides. If no one contests the decision in the next three sittings, the decision stands with no chance of appeal. Farmers prefer this quick, down-to-earth approach to more orthodox (and more expensive) legal channels which often take months to come to a decision. With the tribunal you are told the decision to your face within a maximum of three weeks. The tribunal dishes out fines to anyone judged to have broken a ruling including, on a number of occasions, members of the tribunal itself. When this happens, the offending Judge removes his cloak to answer the charges before re-taking his place in the tribunal to hear any other cases. As tradition demands, all fines are given out in Valencia pounds (but, strangely enough, they accept payments in Euros).

The first historical evidence of the Tribunal de les Aigues appears on stone tablets (now displayed on the wall of the Basilica) depicting a sitting of the court dating back to the time of Roman rule in the second century. There is no evidence of the court throughout the Visigoth era, but the court’s rulings are set out in the chronicles of Abdurrahman, the Caliph of Cordoba, from the year 960. Different sources show that it has sat regularly more or less in its present state ever since.

As the great Caliph’s chronicles show, the modern day workings of the tribunal were largely established under Moorish rule, like Valencia’s irrigation system itself, and Muslim influence on the traditions of the court is still greatly in evidence. The tribunal meets on Thursdays because this was then Moorish farmers would come in to visit the city’s markets, the day before the Muslim holiday on Fridays. The sitting starts at twelve noon because this was traditionally the start of the Moorish working day. When calling people to speak or give evidence, the President signals to them with his feet rather than pointing with his hand, as gesturing at another with your hand was considered to be a personal insult in the Islamic world. In Moorish times the tribunal met at the doors of the Mosque and now they meet at the doors of the Cathedral. This was to allow farmers of all faiths – Christian, Muslim or Jew – who were not allowed into the Mosque or later the Cathedral, to participate in the court.

When Jaume I conquered Valencia he saw no reason to ‘‘Christianise’’ or change a system that worked so well and successive rulers and governments of Valencia have always sanctioned the continuation of the court. Presidents of the Generalitat (Regional Government) and visiting Kings of Spain are the only people allowed to sit on the Tribunal who are not elected members of the local farming community and each successive King and President has taken up this right with four notable exceptions.

Philip V was refused entry by the Tribunal after the burning of Xàtiva and the removal of the Valencia charter of the privileges and Joseph Bonaparte was refused because the Tribunal did not recognise his right to be king, and Franco refused the offer to take part because he wanted to wear his military uniform instead of the batman cape. One-time Generalitat President Eduardo Zaplana committed the faux pas of not contacting the Tribunal during the first year of his office and was subsequently refused entry throughout his presidency. On a number of occasions during the King’s visits to Valencia, Zaplana suffered the indignity of having to wait outside while the King sat on the Tribunal.

Having survived more than a millennium of different regimes and rulers, this ancient institution may be now facing its biggest test yet. With the continual growth of the city, many of the channels and fields over which the Tribunal presides have virtually or completely disappeared. Also, the building of the reservoir at Benageber has brought greater stability to the supply of water to Valencia’s surrounding fields. All this has meant that the Tribunal has found that it has no cases to consider on most Thursdays. Farmers from the regions irrigated by the channels of Moncada and Del Oro have applied for membership to the Tribunal. These two outlying areas are still very rural and would provide many cases for the tribunal and bring it back to life but they have been refused entry on the grounds that the tribunal has presided solely over the original seven ancient channels throughout its life and to allow the two new entries would be a complete break with tradition.

Many people believe that if it is to survive as the grand institution that it undoubtedly is, the Tribunal de les Aigues needs to change. If not, it will surely become just another World Heritage protected piece of irrelevant street theatre.