You are here: Home  /  History  /  HEMINGWAY IN VALENCIA
History 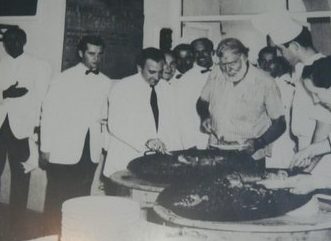 ##The original Guiri loco, Nobel and Pulitzer Prize winning writer Ernest Hemingway described Spain as “the last good country left”. His highly romantic and apologetically hedonistic template for enjoying the country has inspired generations of TEFL teachers and Erasmus students to come over, immerse themselves in the culture, live the life and get uncontrollably & steaming drunk. Hemingway is most closely associated with the cities of Pamplona and Madrid but he also had strong lifelong links with Valencia, visiting here on numerous occasions especially in the month of July for the bullfights taking place during the Feria de San Jaime (it is said he attended the Feria on 15 separate occasions), nearly always staying for months on end.

Valencia appears often in his work; the city is referred to, one way or another, in seven of his novels including “For Whom The Bell Tolls” and “Death in the Afternoon”. As a young & largely unknown writer he first came here in 1925, arriving by train straight from the Sanfermines festival in Pamplona. The festival was over up in Navarra but Hemingway wanted to carry on the party so he followed his favourite bullfighter Cayetano Ordoñez (with whom he would become great friends) down to Valencia.

Arriving at the Estación del Norte, he immediately fell in love with the city. If the station’s colourful ceramic tiles and Modernist architecture impressed him, what really swung it was the huge bullring, which was the first thing he saw as he came out onto the street. In a letter which he sent during this visit to his friend Waldo Pierce, he told him how much he was enjoying Valencia and also expressed some strange ideas about Valencian eating habits, “In Valencia, it’s dammed stupendous at the beach or in the city to eat a melon washed down with a real cold jug of beer”. I must try that some time.

The first place he stayed in the city was the Hotel Reina Victoria in C/Las Barcas, and it was on the balcony of his room in this hotel where he started writing his first novel “The Sun Also Rises”. Years later he would tell how he spent those days in Valencia writing during the morning in bed, and then having a late breakfast, continuing writing until the time for the start of the bullfights. Then, in the evening, he’d go down to Malvarrosa for a swim. Hemingway finished this first book in Valencia, “I’ve got 60,000 words” he told his father in a telegram he sent from the grand central Post Office in the Plaza del Ayuntamiento.

In the following years he would return many times, more often than not staying at the Hotel Inglés in front of the Palacio Del Marqués de Dos Aguas in C/Poeta Querol. He took his first wife Hadley there on his second visit in autumn 1925.

In 1937, in the middle of the Spanish Civil War, it also became his favourite place to take his then lover the renowned war correspondent Martha Gelhorn who later became his third wife. Gelhorn had agreed to go to Spain with Hemingway to report on the Civil War. She worked for Collier’s weekly while he wrote for the North American Newspaper Alliance. During the war, Valencia was the capital of the Republic. Hemingway reported on and photographed the bombing raids on the city carried out by the “Nacionales”. When visiting wartime Valencia, he and Martha would head each day to the Foreign Ministry to get passes to the front or to send their articles. This being Hemingway he would usually stop for a few drinks in one of his favourite bars at the time, which was located in the basement of the Ministry, the cafeteria ”Alianza de Intelectuales”. This once famous bar was in the building that now houses the Hotel Vincci Palace in C/de La Paz and there is a plaque on the wall in remembrance of the anti-fascist intellectuals who met there.

Despite the air-raids, compared to some other cities Valencia was relatively far from the front for most of the war. Being the capital of the Republic it was full of politicians, soldiers, artists, foreign diplomats, intellectuals, spies, refugees and war correspondents coming from all over Europe and the rest of the world. People living fast not knowing what was around the corner. All of which fermented a very active and interesting nightlife in the city, which was a great attraction for the writer. One of the standout bars, which were symbolic of this time, was the “Café Ideal Room” in C/de La Paz on the corner with C/Comedies. These days, it is a shop but it still has its beautiful Modernist windows and on the inside its 1920s stucco decoration. Here Hemingway would discuss art, politics, the war and whatever else with his friend the writer John Dos Passos along with other regulars like Francisco de Ayala, W.H. Auden, Octavio Paz and Antonio Machado. Further up C/Paz was another favourite “intellectuals” haunt the “Café Del Siglo” which also no longer exists but whose name you can still see on the façade of the building above a shop entrance just before the corner with the Plaza de la Reina.

Hemingway loved to go to these bars but possibly his favourite place in Valencia (after the bullring) was “Restaurante Pepica” at Playa de las Arenas. It is still there now, a somewhat pricier option amongst the numerous paella restaurants along the beach front. It still conserves some of the atmosphere and style of old and there are of course a number of photos of the writer sitting at its tables. The restaurant gets a mention in his book “The Dangerous Summer”: “Dinner at Pepica’s was wonderful. It was a big, clean, open-air place and everything was cooked in plain sight. You could pick out what you wanted to have grilled or broiled and the seafood and the Valencian rice dishes were the best on the beach. You could hear the sea breaking on the beach and the lights shone on the wet sand”.

When the war ended in 1939, with Franco victorious, Hemingway swore he would never return to Spain under a dictatorship. He did, however, return in 1953 older, more taciturn & starting to show the effects of the years of drinking. He was now a celebrity who was referred to by everyone as “Don Ernesto”. Too celebrated and too famous to be ignored, he was humored by the regime he had railed against.

He still had a few wild days left though. He was even thrown out of the Hotel Metropol on C/Játiva. So the story goes… he decided to take some shooting practice from his hotel window trying to light the cigar that his friend and fellow bullfight fan, Orson Welles, was holding in his mouth in the street below opposite the bullring. A few years ago, ‘24/7 Valencia’ interviewed British writer & long-term Valencia resident Christopher Wright who knew one of Hemingway’s tearaway friends in Valencia: “Reggie Bowler was another character and wonderful raconteur. He knew author Ernest Hemingway, both in Africa and Valencia. In fact, they were both banned from what was the Hotel Metropol in front of the bullring. Continuing the fiesta which had started at the Pepica restaurant on the beach, they squirted the hotel customers, including the mayor, with gin-filled water pistols”

The last time Hemingway came to Valencia was in 1959, he stayed at the Hotel Royal, which was on the corner of C/ Las Barcas and C/Pascual y Genis. The famous Alicante photographer Paco Cano who specialized in bullfights and bullfighters photographed him there. The photograph is exhibited in Valencia’s Museo Taurino, the big man standing tall with bushy white beard next to the bullfighter Antonio Ordoñez, the son of his great friend Cayetano…the man who had first brought him to Valencia nearly thirty-five years earlier.