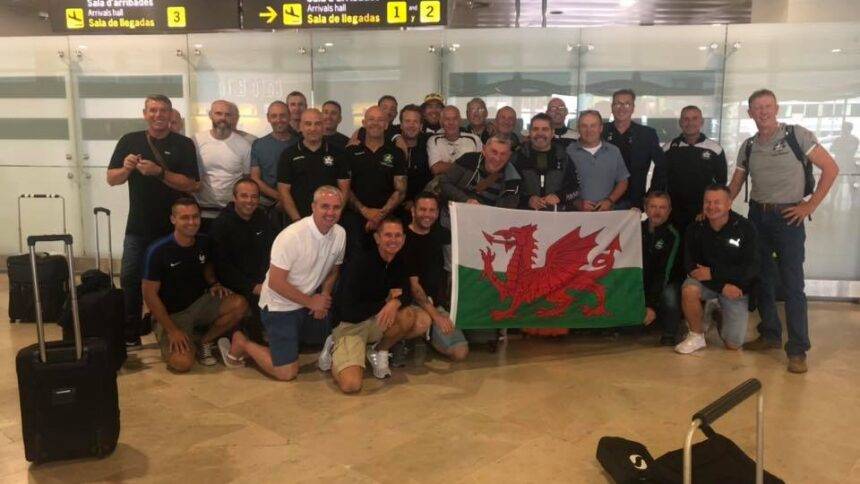 FROM SWANSEA TO VALENCIA…VETERANS FOOTBALL CLUB ON TOUR! 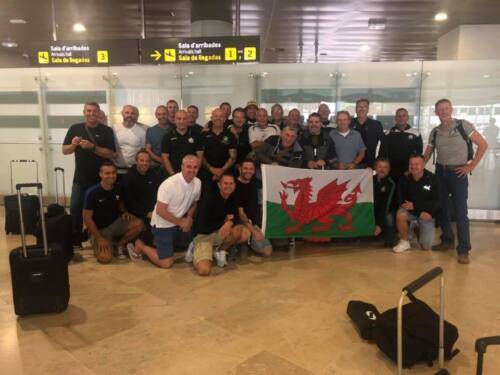 ##24/7 Valencia: Can you tell us about your background and upbringing?

Geoff Stockton of Swansea University Veterans Football Club: I was brought up in the coastal village of Mumbles on the Gower Peninsular. Gower was the first area of outstanding natural beauty in the UK. My grandfather was a coal miner from the Welsh valleys and my father worked in retail. They were both heavily involved in amateur dramatics as actors, singers and directors. My Nan was the choreographer. I was sports mad, playing football in the winter and cricket in the summer. Rugby was also compulsory at school and I played at full back, but my first love was always football. I played for the local team ‘Mumbles Rangers’ as a child and into my youth. Later, I played for other teams including arch local rivals Murton Rovers. I was a goalkeeper, though I never really enjoyed it. At most clubs ‘keepers are in short supply and I wasn’t bad, not great, but I had a basic idea so I was stuck. Peter Bonetti of Chelsea was my goalkeeping hero. I’d often played for our second team in the early k.o. as centre half or centre forward, and then rush off to the first team to play in goal in the later kick off if the first team keeper hadn’t turned up! I took a break from sport for about 15 years as my job involved moving around the UK. I then returned to Swansea and studied law at Swansea then later at Cardiff University. I began playing cricket and football again in my thirties. After playing ( in goals) in a local cup final at the old Swansea Vetch Field, I decided to hang up my boots at 45 years old.

Could you describe a typical month at Swansea University veterans football club? After giving up football my life became a bit sedentary and by my early 50s I had piled on the pounds, and found I was breathless just walking up a short hill. When I was 53 I made an effort to get fit so i started the couch potato to 5k challenge. After a few weeks i was running again, and felt so much better. I also joined a local boot camp class to help with fitness.

I was then told about a veterans football team being started at Swansea University by Neal Evans. When I started, there were barely a dozen or so of us. I knew one or two faces from my playing days, the majority being over 50. We trained regularly and then arranged a friendly game against a well-established vets side, and we were roundly thumped 9-2!

Things have moved on since then. We now have over 150 players signed on. We have teams at over 40, 45, 50 , 55 and now over 60 all playing in the Wales Veterans Football League. The league is made up of clubs from across South Wales. They have a league international side playing against the home nations and other international teams. Many of our players have proudly represented their country at this level. We have also recently hosted the academic over 56 World Cup and  had some recent successes in Leagues and Cups.

We train three nights a week. League games are on a Sunday. If teams are not playing we have inter-squads for everyone to play. These are 11 a side games with a mix of age groups. It’s great fun and helps keep all the sides together as friends. It would be too easy for each age group to stick with each other. I’m 60 now and I find it tough chasing a 40 year old down the touch line, but well worth it if you do make a tackle, or occasionally score against a “youngster”! These inter-squads are also used to introduce new players and for players who want to play, but have no interest in league matches. This is part of our ‘Football for All’ policy. We have put in place a code of conduct which is strictly adhered to. The committee works hard to keep the club together, and ensures it’s the best run club I have ever been a part of.

Tell us about your experiences of travelling abroad with the club…We’ve been having annual tours in the UK and abroad for 4 years. We have been to Tarragona, Albufeira in Portugal, Viareggio in Italy and now Valencia. The initial tour was 16 of us, now it has grown to 32. The most important part of any tour is a game versus a local team. We were lucky enough to be in Tarragona during the Festival Santa Tecla. The fire running was spectacular. We played Sant Carlos de la Rapita. This was the home town club of Swansea City legend Angel Rangel. We didn’t know that veterans’ sides were over 35 in Spain and we were shocked to see so many youngsters on the pitch. We were well beaten 9-2. I will always remember the local supporter coming to the goals and handing me a beer when we were 3 down after a few minutes. He said “you look like you are going to need this“.

Viareggio is a beautiful and sedate seaside town near Florence and Pisa in Tuscany. It has a long promenade of top restaurants and bars. A group of the players cycled along it and had a great day eating and drinking at many stops. When there I visited Lucca the birth place of Puccini. I’ve always loved his music. Lucca is truly lovely and I had the best pizza I’ve ever eaten there. The team we played were based at Livorno. Again they were much younger than us, some in their 20s and we were happy to hold them to a 2-0 defeat.

Could you tell us more about your visit to Valencia? We chose Valencia as we were looking for somewhere with sun, nightlife and a beach as these seem to be a tour requisite! The city also has a great history of football. It was through ‘24/7 Valencia’ I was introduced to Barry Eaton of Valencia Sports tours. Barry arranged our hotel, transfers and games. He was great throughout and everything went smoothly. We won our first game, beating Caxton College 9-2. The game for our older members was hit by floodlight failure. We did manage to finish a half-pitch game and drew 1-1 against a mixed team of expats and locals.

After we played, ‘24/7 Valencia’ had organised food and drink at the Bear Club Centro Irish Pub. The food was great and the wine and beer flowed. This meal together after the game is an important part of the tour and I want to thank Sergio, Elizabeth and the other staff for the great service and patience dealing with 32 of us. On the three nights in Valencia I don’t think many of us were in bed by 4am. Not bad, given some of us are almost pensioners. Our days were spent exploring the city, on foot or by bike. The old town was lovely, and full of life, day and night. The team also loved the beach. A group of us visited the Mestalla  for the Sunday game. A great experience and a wonderful atmospheric stadium. I regretted not being there when Swansea won 3-0 in the Europa League in 2013.

At the end of the tour one of the lads said: “Best Tour Ever.” Everyone agreed!