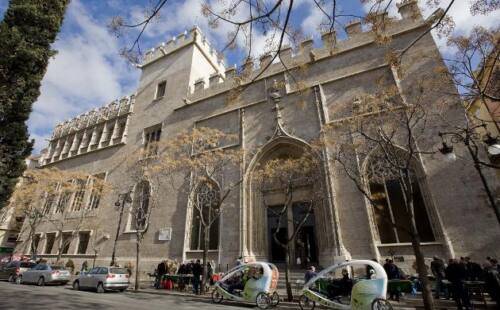 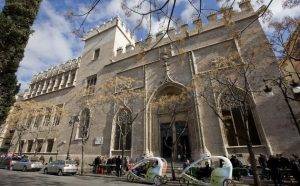 The United Nations agency UNESCO has designated 851 sites around the world as World Heritage sites, which form part of the “cultural and natural heritage of the world” and are considered as having unique and universal value to the history of humanity. One of those sites is in Valencia and, you may be surprised to learn, it’s not Levante’s Ciudad de Valencia Stadium.

While the Miguelete is a century older and the Albufera is more naturally beautiful, La Lonja in Plaza Mercado outshines them all. Unlike any other city in the world, the outstanding Gothic building in Valencia is not its cathedral but a non-religious civic monument to commerce. Before it was built in the late fifteenth century, all major buildings and institutions in the city were owned and run by the church. Breaking with this tradition, La Lonja was a physical representation of a shift in power during Valencia’s Golden Age from the cardinals to the carpet traders, the bishops to the bankers. Here was a monumental building not built to the flory of God, but to the power of the Valencian economy as a trader in the Mediterranean market.

Anyone who’s had their bathroom refitted in Valencia will know how things work round here. After endless negotiations the builders finally arrive, they make a superficial start to proceedings and destroy your old bathroom and then you don’t see them again for weeks. They then come and do most of the work but never quite finish. There’s always a tap or a tile missing or the door doesn’t quite fit. This is a long held and respected Valencian tradition (watch this space for the building of the new Grand Prix circuit) and the building of La Lonja was no different. The first stone was laid in November 1482 but work didn’t really start until a year later. Once they got going it was more or less built in 15 years (pretty good going for the fifteenth century) although it took another fifty years before it was completely finished. You can read all this on an inscription above the back doorway in Plaza Doctor Collado giving exact details about the different stages of the building’s construction.

Although not a religious building, La Lonja certainly has sacred pretensions as a “temple” of commerce with many spiritual and biblical symbols on show. There are religious icons and gargoyles all around its façade. If you’re into this sort of thing, look out for the little man having a dump above one of the basement floor windows. The design of the building followed an initiatic code, a sort of medieval Feng Shui, where everything, down to the exact number of columns and the distance between them, was all calculated to give the maximum spiritual harmony to the merchants working there.

There are three parts to the building. The largest part is the Sala de Contratación or the trading floor with its 24 columns twisting up 17 metres, until they open up like palm trees on the ceiling which was painted blue and decorated with starts to imitate the Valencian night sky. Back in Valencia’s golden age this was a bustling hive of activity, its modern equivalent would be the great stock markets of today. When the City granted merchants official status as “Mercaders de La Lonja” , they were given a table to deal from and a red velvet cloth with which to cover it. Along with the buying and selling of exotic products from all over the known world, mortgages and loans were also arranged here. Officially, Christians were not allowed to charge interest, hence the importance of Jews as money lenders, but the merchants of the time soon found ways around this.

Running along the walls of the room is an inscription reminding the merchants where they were and calling them to honour their surroundings and to trade honestly and fairly. Those failing to do this (well, those who fell foul of the city leaders anyway) were sent to the dark cellars of the Tower which rises up through the roof of the building. The merchants were given six months to settle their debts or pay back what they had been judged to have cheated (not that easy when you’re trapped in a rat-infested dungeon). If they did not comply they were taken to the chapel at the top of the Tower. On their way up, they probably, given the circumstances, neglected to admire the unique stone staircase ingeniously built without a central column. After making their peace with their maker, they were taken to their own table on the trading floor and beheaded in front of their fellow merchants. The city then took back its cloth and gave the table to someone else. Now that’s what I’d call zero tolerance to white collar crime.

The Consulat del Mar or maritime consulate is accessed through the garden at the back of the building. This was luxury office space (the ceilings are decorated with gold leaf and fine wood carvings) for the trade delegations which were maintained by all the major trading cities of the Mediterranean in the fifteenth century, with representatives from as far afield as Damascus, Rome, Venice, Egypt, Beirut and many others.

On the exterior wall is one of the mysteries of La Lonja. The wall is decorated with a series of forty medals bearing men’s faces but historians can’t make up their minds who they are supposed to be. Are they Roman Emperors? Aragon kings? Leading merchants? Famous paella chefs? Ali Baba’s forty thieves? We’ll probably never know.

After the discovery of America, Spain’s Mediterranean ports started gradually to decline as importance shifted to the Atlantic coast. Valencia’s Golden Age was coming to an end, as was the heyday of La Lonja. It remained an important part of the Valencian economy as the city’s silk exchange until the nineteenth century when oranges and rice replaced silk as the region’s principal export. During the civil was, La Lonja was briefly to recapture its former glories when it was used to house the Spanish parliament while Valencia was capital of the Republic.

So, in the twenty-first century, what do you do with a wholly exceptional example of a secular building in late Gothic style, which dramatically illustrates the power and wealth of one of the great Mediterranean mercantile cities? Well, that’s a problem that successive Valencian governments have consistently failed to find a solution to. It has been used for parties, royal weddings, as an exhibition centre and a museum. Since its designation as a World Heritage sight La Lonja has become a bit of a museum piece in itself and is considered to be too precious for such trivial uses.

Even the annual exhibition of Fallas figures has been moved to a local shopping centre. While the Cathedral still serves the purpose for which it was built and the Mercado Central across the road bristles with the very lifeblood of the city, La Lonja stands dustily still and largely empty.