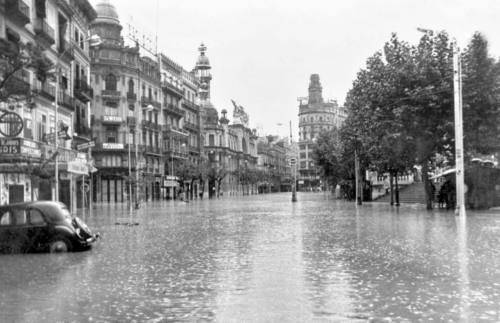 ##For most of the year the Turia was a dormant little stream which trickled along the sticky mudflats, which Valencia liked to call a river. Writing at the beginning of the nineteenth century, British writer Richard Ford mocked the Valencians for the false grandeur of their magnificent bridges and high river walls… all for a piffling little brook. What he didn’t know was that twice a year the river swelled with the autumn and spring rain or that every ten years or so it flooded the city. It was a supposedly normal Monday in 1957 in Valencia. On October 14th a flood came, which caused such devastation it was to be an historic turning point in the way the city developed. It helped shape what we know as Valencia today.

Valencians knew that you tended to get a bit of rain in these parts around October time but no one  could have imagined the scale of the tragedy which was about to befall them. On the Saturday, two days before the flood, was the festival of Pilar. There had been heavy rain and the scheduled bullfight had been cancelled. Sunday morning, however, had seen only a few showers catching people on their way to Mass. The afternoon had been dry, Levante’s match against Tetuán had gone ahead and people crowded into the city’s numerous cinemas. In a curious twist of fate, one of the most popular films that weekend was the disaster movie ‘Typhoon over Nagasaki’ at the ‘Olimpia’. They needn’t have bothered going to the pictures, it was all about to happen right in front of their eyes.

While people were turning in for the night, some of the heaviest rains ever seen had been falling further inland and some night owls marvelled at how the river had swollen. Not long after midnight, the first wave struck. At a rate of two thousand seven hundred cubic metres per second, water poured into the city. Within minutes, houses around Calle Alboraya and Calle Sagunto were letting in up to a metre of water. People scrabbled their way to upper floors, climbed trees and statues, the lights went out and the violent rush of water could be heard all over the city.

This first wave only affected people who lived in the vicinity of the river, especially along its North bank and nearer the sea at Malvarrosa and Nazaret. The ancient doors of the Monasterio de la Trinidad were wrenched off by the force of the water. Things calmed down at around 4 a.m. During that morning, people from the centre (as yet unaffected) ventured out to see the fast-flowing water and the eerie sight of drowned cows, floating down to the sea from a cattle farm further upstream. The Pont de Fusta (or wooden bridge) in front of the Estación del Puente de Madera had been completely washed away. Little did they know the worst was yet to come.

At around two in the afternoon, a second wave crashed in. It was bigger than the first, at nearly four-thousand cubic metres per second. The river recovered its ancient course through the city centre, which had been dry since the eleventh century. Vast waves of water flowed furiously into the Barrio Carmen down Calle Baja, through to Bolseria, past the Central market, across the Plaza del Ayuntamiento and out again down Calle Barcas, a street which had originally taken its name from an ancient landing stage when the river had previously flown through the city. Most of the centre was under three metres of water, the worst hit areas were again on the North bank, Calle Doctor Oloriz was under more than five metres. Despite being close to the river, the Cathedral and the whole of the old Roman city was left completely untouched becoming once again the ancient island on which the city was founded.

The true death toll is unknown but official figures state that more than a hundred people lost their lives. Many more lost their homes, belongings and livelihoods in the case of some shopkeepers and traders. One body, found on the wall of the Viveros gardens after the waters had subsided, was that of Micaela Chulvi Benaches who hadn’t been killed by the flood at all. She had died of old age at 84 and was lying in state in the family living room when the waters washed her away. One man who had been trapped on the Puente de la Trinidad had climbed onto the head of the Statue of Santo Tomás de Villanueva to escape drowning. After holding on for more than two hours, he was finally thrown a rope and rescued to great cheers from the watching crowds. Many people had saved themselves by holding onto the railings and climbing up to first floor balconies along the Calle Barcas but the city itself would never be quite the same again.

The clear up began almost immediately and help came from all over Spain. The first to arrive was the Cartagena fire brigade from Murcia. Those doing military service in 1957 & 1958 were brought in to clean the city, spending most of their time up to their knees in the vast amounts of mud and sludge that the floods had left behind; they were known as the Quinta del fango “the mud generation”. New housing was built in the middle of the fields, which are now Avenida Blasco Ibáñez for those who had been made homeless. The development was named after l’Alguer in Sardinia. Rising up as it did in the middle of the Huerta it quickly became known as “La Isla perdida” (the lost island).

The river was diverted and a new river bed with a capacity to handle water flowing at up to 5,000 cubic metres per second was built to the south of the city. Just in case, the south wall of the new river is slightly lower so any future flood would flow south, away from the city. What the residents of Sedaví, Benitusser and Torrente thought of this at the time is not known.

After twenty years of bickering about what to do with the old riverbed, some bright sparks wanted to build a huge motorway right down the middle. Thankfully, the plan did not come to fruition.  Work finally started on the Turia park as a public green space, running right through the city, still known universally as “the river.” Subsequently, most significant public works have been centred on this previously neglected area, including the park itself, the Ciudad de las Ciencias, the Palau de la Musica, the Parque de Cabecera, the Bioparc. As a direct legacy of the flood, the seeds of modern Valencia were sown.

With many of its shops and houses devastated and destroyed, the Barrio Carmen was never again to recover its role as the business and commercial centre of the city. The shops and businesses moved out first to La Avenida del Oeste and later to Calle Colón. The last remaining aristocrats abandoned their crumbling Carmen palaces and joined the upper middle classes around the Gran Via and the barrio was left to rot. This may not have been such a bad thing. While the Calle Colón has lost all but a few of its original buildings to huge department stores & chains & franchises…the Carmen has been preserved in all its intricate, dusty, dilapidated splendour. Had it not been for the flood we might have had a huge concrete ‘El Corte Inglés’ built right in the middle of the Plaza de la Virgen or over what, thankfully, is still old Calle Caballeros.