You are here: Home  /  History  /  Montserrat Amorós (Valencia region) internationalises ‘the Way of the Holy Grail’ in Greece
History 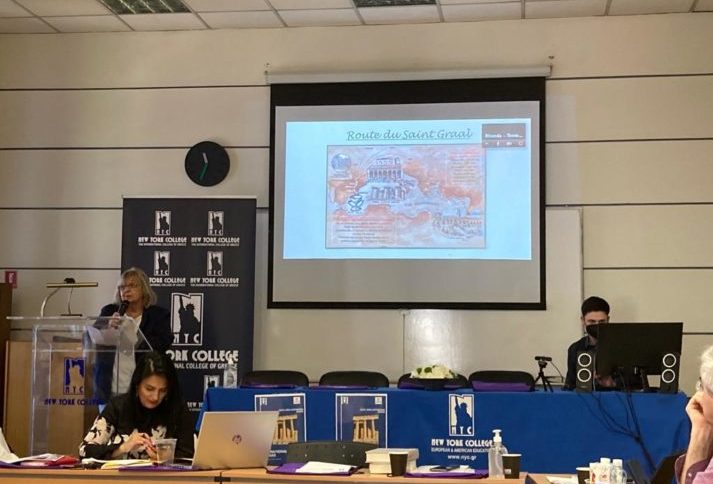 This April the proposal of a training course to complement the activities of the Cultural Association of the Way of the Holy Grail was presented at the International Seminar Universities and education throughout life, held in Athens on April 8 in the city of Athens, Greece.

The Seminar was part of the activities organised by AIUTA (Association Internationale des Universités du Troisième Âge) and the New York College of Athens, which celebrates this year the 30th anniversary of its foundation.

The training proposal will be carried out during the academic year 2022-2023 and will complement the existing tourist offer of activities. It includes several monographic online courses on different topics such as the diversity of the landscape along the route of the Way, the different artistic styles that can be seen along the route and the literary manifestations around the relic. Four seminars are also planned in towns where a specific Rural Campus will be set up.

It is aimed especially at all those people who live along the municipalities along which the Way of the Holy Grail runs, on its main axis known as the Route of Knowledge, the Way of Peace. This route starts in Canfranc and runs through Jaca, the Royal Pantheon Monastery of San Juan de la Peña, the province of Huesca until it reaches Zaragoza and from there it crosses the whole of Teruel until it enters the Valencia Region via Barracas.

In Valencia the municipalities of the route are:

The proposal will be presented at the next General Assembly of the Association to be held next May for approval and has the support of both regional, local and county administrations and public and private institutions.

We remind you that the Cultural Association The Way of the Holy Grail is working with several international associations to ensure that this main route becomes a true European Cultural Itinerary and that people from all over the continent come to the city of Valencia, crossing the Pyrenees and enjoying a unique experience of knowledge.