You are here: Home  /  Editorial  /  HEALTHY PIZZAS AT ‘PIUR’ IN THE CENTRE OF VALENCIA (EXCLUSIVE INTERVIEW)
Editorial 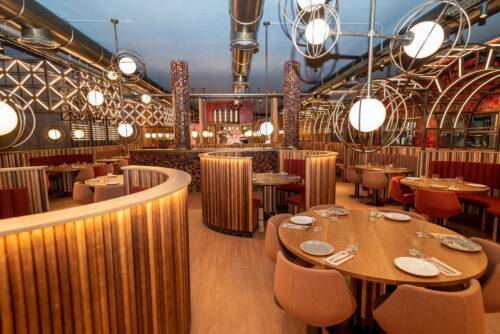 HEALTHY PIZZAS AT ‘PIUR’ IN THE CENTRE OF VALENCIA (EXCLUSIVE INTERVIEW)

PIUR: “Piur is the new gastronomic and leisure place in the city of Valencia. Under this name, a new gastronomic concept has been born in the city of Valencia with an honest proposal, which highlights the value of  quality raw materials and local products. The inauguration of the restaurant, located on Pascual i Genís Street, 19, was attended by familiar faces of the city as well as the celebrity Tamara Gorro and influencer Héctor Campoy. A well-designed and modern space, inspired by the Central Market of Valencia, which transmits the brand’s own personality and in which a central bar for tasting original cocktails stands out. The city of Valencia witnessed on October 15 the inauguration of PIUR, the new gastronomic and leisure place of the city that was born with the vocation of becoming a reference in Valencian society. Located on Pascual i Genís Street, nº 19, PIUR wants to move consumers to a new way of understanding cuisine, focusing on the quality and honesty of products and processes.

Founded by Valencian brothers with more than 20 years of experience in the food industry, they have now decided to open not only a restaurant but to launch a new gastronomic concept through which to demonstrate the kitchen… with the emphasis on the origin of the raw materials and the value of local products. All this at very affordable prices.

“Our goal, but also our illusion, is to create a cuisine adapted to the needs of today’s consumer, in which he and she  feels at home and is treated as if  he or she  were part of our own family. In Piur, there are proposals for different dishes, especially in our pizzas, but with very common ingredients in our day to day and all of them treated naturally. ”says José Baringo, Director General of PIUR.

On the day of the inauguration of ‘Piur’, there have been numerous known faces that have wanted to accompany and cover this opening, showing their support and confidence in the success of the business. Among the many guests, we enjoyed the presence of the well-known businesswoman Tamara Gorro as well as other personalities of the social life of Valencia as the influencer Héctor Campoy, who enjoyed the evening surrounded by music and a great atmosphere.

We have a carta that reinvents itself. The first evidence of this real commitment to innovation can be seen and, better yet, tested, through our original pizzas with chistorra and egg, with salmon and tartar sauce or vegetables with only 505 calories, which makes it pizza with the fewest calories in Spain, less than a Caesar salad or a tuna sandwich with mayonnaise. Its ingredients include a thin and crispy dough, natural tomato sauce, different types of pepper, zucchini, broccoli, mushrooms and cherry tomatoes. From the dough, to the sauce, through its ingredients, its offer of salads, starters and pastas, Piur offers a different selection with which the objective of occupying a relevant position in Spain as an original concept of cuisine.

Since the founders began to think about Piur, a very important aspect that is in every detail – from service, food, to decoration – it has been that all diners felt comfortable. Therefore, it is not only an honest place to dine but its design, inspired by the Central Market of Valencia and carried out by the interior studio ‘More than Space’, conveys Piur’s own personality. Thus, in addition to a modern conception built on terracotta tile, in this first restaurant there is a central bar for the tasting of original cocktails, whose elaboration is a spectacle starring the bartenders of Piur. The place also has its own music as well as avant-garde and cosy lighting, which makes it a new place of reference in the city.

Valencia is the starting point of a brand that aims to expand its business in Spain over the next few years progressively.”