You are here: Home  /  History  /  San Vicente Mártir (SAINT VINCENT THE MARTYR) IS THE PATRON SAINT OF VALENCIA
History 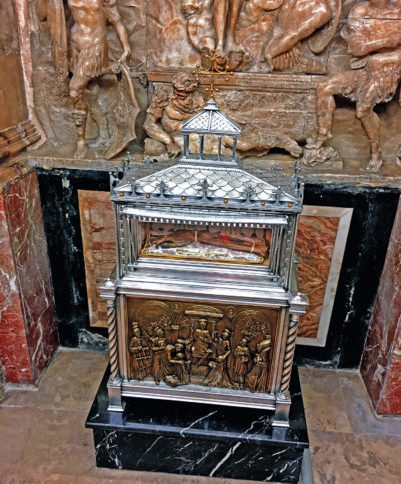 #HE IS CELEBRATED IN VALENCIA ON JANUARY 22nd, THE DAY OF HIS EXECUTION…

Vicente de Huesca, also known as St. Vincent the Martyr was a Spanish cleric, a deacon of St. Valero of Zaragoza. He was denounced and imprisoned under Diocletian, so the Church reveres him as San Vicente Mártir. According to tradition, Vincent was accused of preaching the faith because of a speech impediment that affected Bishop Valero.

A bloody persecution against the Christians, decreed by the emperors Diocletian and Maximian, was originated. In March 303 the first imperial edict was published in this sense, carried out by the prefect Publius Dacianus, who came from Rome and remained in the Peninsula for two years, tormenting the Christian population with fanaticism and cruelty. Publio Daciano arrived in Hispania through Gerona, where he entrusted the fulfillment of the imperial decrees to Judge Rufino, passing him to Barcelona and then to Zaragoza.

Valero and Vicente were arrested in 303 by order of the governor Publio Daciano, and transferred to Valencia. Valero was condemned to exile and Vicente suffered martyrdom, finally dying on a vague date – tradition assigns him 22nd January – in the year 304 or 305. According to legend, he converted his executioner before dying.

From the place of his first burial, Vicente’s body was moved, in the same century of his martyrdom, to a basilica outside the city walls, next to a Christian suburb, known as San Vicent de la Roqueta, which maintained the cult throughout the Islamic period, being documented by different Christian owners, such as the Monastery of San Juan de la Peña, Reyes or Poblet. Being the cult that was carried out during the Muslim domination.

Vincent’s arm is kept in a chapel in Valencia Cathedral

He is the patron saint of Lisbon, of the town of Ardanaz de Egüés, Sigüenza, Corbera, Lucena del Puerto, Guadassuar, Laujar de Andarax, Molina de Segura, San Vicente del Monte, San Vicente de la Barquera, Graíces, San Vicente de Alcántara (Badajoz), Paredes de Escalona (Toledo), Zalamea la Real, of the Italian city of Vicenza, of San Vicente de Cañete, in the province of the same name in Lima, of Los Realejos (Tenerife), where it also has the privilege of being the only image of the Holy Martyr in the entire Canary archipelago being a holiday every January 22nd since 1609 by vote of the old town hall of Realejo de Abajo after the end of the plague of Landres where the town hall goes, this being one of the oldest civic-religious processions in the Canary Islands in gratitude to the co-patron Saint Vincent the Martyr, the vintners and vinegar makers. Its festival is celebrated on January 22nd.

In the city of Valencia, in addition to being its patron, San Vicente Mártir is also the patron of the Guild of Dressmakers and Dressmakers. Valencia’s patron saint festival is held on 22 January.

San Vicente is the patron of the Order of the Deacons of the diocese of Bergamo (Italy).

He is also Patron Saint in the Mexican towns of San Vicente Tancuayalab, in San Luis Potosí, and San Vicente Chicoloapán, in the State of Mexico.

First Vincent was placed on a cross on a sail and then in the catasta, where his bones were broken, he was whipped, and his flesh was cut open with steel hooks. But, unable to undermine his resistance, Publius Dacianus then ordered him to be skinned and placed on a grill in embers. He was later thrown into a dungeon, dying later and being thrown into a rubbish dump, where he was defended by a great ramada eagle.

His body was still thrown into the River Turia in a millstone, but was returned to the shore, receiving a burial on the outskirts of Valencia, later moving to Lisbon, in whose cathedral his remains lie.