You are here: Home  /  Editorial  /  THE CATHEDRAL TOWER…EL MIGUELETE
Editorial 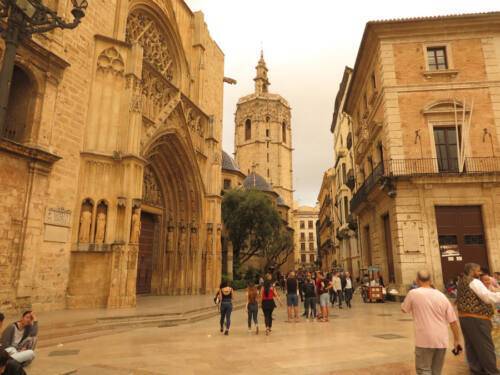 ##It houses the oldest and largest musical instrument in the Comunidad Valencia. Juana la Loca, the Borgias and Blasco Ibañez have climbed its steps. The inventor Juan de la Cierva flew his Autogiro (a sort of prototype helicopter) off its terrace in 1924. Zeppelins flew over it and later bomber aircraft threw their dark shadow over it in the ‘30s and the Great Bordini rode down it in a motorbike in the ‘70s.

Forget the City of Arts and Sciences, the Torre de Francia, and the Modernist temples of the Estación del Norte and the Central Market. Don’t even think about the Parotet and the Palau de Música. The Torres de Serranos runs it close but if any one building has become a symbol of Valencia it’s the cathedral bell tower, known to us all as Miguelete. It has stood watching over the city for nearly 600 years, its bells ringing out warnings of pirates, French invasions and air raids. It has overseen the fall and rise of new republics and civil wars and has taken on a popular identity all of its own, separate from the cathedral itself.

Construction started in 1381, and the tower was completed in 1429. It was built in a style dictated by the Templar Knights, who had a thing for mathematical symmetry. So it is perfectly octagonal in shape and its perimeter is exactly the same as its height from the base to its original terrace (51 metres). Various bits and bobs were added and taken away over the centuries and it now stands at 71 metres to the tip of the cross at the top of the belfry.

The Templars also left their mark on other weird and wonderful features of the tower. The prison, in the tower’s second section is a dark, stone room with five-metre thick walls where those who entered the cathedral asking for “sanctuary” from the forces of law and order were kept. An unusually designed window, which is not in line with the rest of the tower, only allows sunlight into the room for just two minutes on exactly the morning of 15 August, the Catholic feast of Assumption to which the cathedral was originally dedicated.

Another strange feature is the Piedra Sillar or foundation stone, which is at the base of the tower in C/ del Miguelete and juts out a little from the others. If you give it a sharp knock, you can hear the sound clearly up in the bell room. To this day nobody knows exactly how it works; some sort of cavity must have been incorporated into the building but there is nothing in the original plans. It was used to let the bell ringers know when to start work.

There are centuries-old graffiti both in the prison and the bell room, where people who lived or worked their left their mark. In between the two is the bell ringer’s quarters. The last man to occupy them was one Marlano Folch, who lived there and took charge of the bell tower for 60 years ‘til he died in 1905. His name is scratched onto the stone walls within which he spent a whole lifetime.

It costs 2€ to go up (or 8€ if you want a tour of the whole cathedral in one of eight languages; 5.50€ for children, students, pensioners and disabled). Once you’ve negotiated the rather tiresome traffic light system which allows people to come up or down without having to pass on the narrow spiral staircase, there are 207 steps which are quite steep (some of them are 25 cms high), so it can be heavy going.

It’s worth it when you get to the top. Valencia is relatively flat and you can see the whole city. All the way from its western reaches and the mountains to the sea in the east and the huerta in the north and south, against an unusually bright blue sky. Immediately below are the clay tile rooftops and terraces of the chaotic, rambling Barrio del Carmen and the Torres de Quart and Serranos, which give you some idea of the limits of the ancient city.

If you look up you see the huge Miquel bell, which rings out every hour and gives the tower its name. It is 2.38 metres in diameter and weighs a little over 7,500 kilos. This is the fifth version of the Miquel bell and has hung there since 1532. Some of the previous bells had been cracked by lightning bolts and in 1519, one of them fell from the tower in a violent storm and smashed to pieces with a thunderous crash down below. If must have caused a bit of panic but, knowing Valencians and their love of loud bangs, they probably just stood around and applauded.

Along with the Miquel there are two smaller bells, which chime the quarters, and 13 interior bells housed within the tower. Apart from a period between 1960 and 1988 when the bells were temporarily electrified, these bells have been manually played to ring out for masses, matins and vespers and give news of victories, defeats, floods and pirates on the coast for more than 500 years. In the modern noisy city it’s easy to ignore them, but for centuries people timed their days and organised their lives by the sound of the Miguelete’s bells.

The Miguelete tower itself has played an active role in Valencia’s history. In the 16th century it served as a beacon with a permanent guard watching the coast. Bonfires were lit at the top of the tower to warn of attacks as part of a string of beacons that went all the way up to the Ebro. The same system during the War of Succession and the Napoleonic invasion in the 19th century and the tower was hit by a grenade during the Carlist wars in 1868. During the Civil War in the 1930s it was used as a watchtower with sirens and loudspeakers to warn of air raids coming over from Mallorca.

The Miguelete runs right through the heart of Valencia city life, going back over the last six centuries. It appears in classic paintings, propaganda posters, newspaper cartoons, adverts and on tourist t-shirts. Distances from Valencia to other points are all measured from the Miguelete. It is no longer the highest building in the city, but if something is tall in Valencia it is said to be “taller than the Miguelete”. It is a religious building which has become something more—part of the city and its culture. A point of reference.

Closed 13h-17h during the winter (November through mid-March)