You are here: Home  /  History  /  THE IRISH / SPANISH CONNECTION…LETTER FROM CELTIBERIA
History 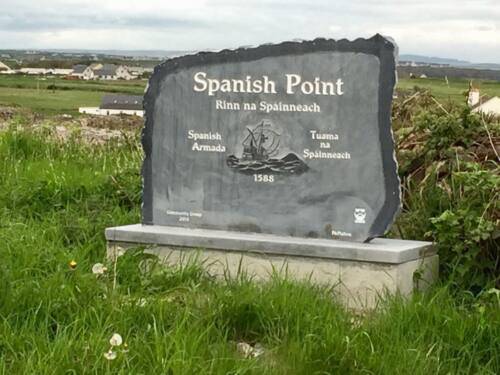 As I went out to Dublin city, at the hour of twelve at night, who should I see but the Spanish lady, washing her feet by the candlelight —The Spanish Lady, The Dubliners

Tourist in Ireland: What’s the Gaelic for mañana?

Irish local: Oh, I don’t think we have a word that describes quite that degree of urgency.

In medieval times, most settlements larger than a hamlet were surrounded by walls to exclude potential invaders, and my home town of Galway was no exception. A stone archway that once formed part of the wall still exists, beside the river mouth. Tourists take photographs, locals arrange to meet there, swans waddle past. There is an open area adjoining it, and on those rare but glorious sunny days, locals come to play football, roller-skate, and catch those seldom-seen rays. The name of this structure is the Spanish Arch.

At times  beneath this arch, you may meet a dark-haired, dark-eyed person who you would swear just got off the plane from Madrid, until he opens his mouth and a strong brogue issues forth. The tradition is that such people are the descendants of the Spanish Armada, although few enough Armada survivors landed in Ireland to have made much impact on the population. It is more likely that the trade between the two nations was responsible. Galway was a port, a trading town, and much of its trade came from the Iberian Peninsula; hence the Spanish Arch. Large numbers of sailors stopping off over the years would leave behind more than oranges and silk.

When the Irish earls of the sixteenth century rebelled against the English, it was to Spain they turned for financial aid; and when the rebellion was inevitably crushed, it was to Spain they ran in what would become to be known as the “Flight of the Earls”. The blood of those earls no doubt flows in some blue-eyed Spaniards’ veins today.

But the Irish/Spanish connection goes back further than that. Irish legend refers to Ith, who looked out from his tower on the northern coast of Spain and saw a land to the west. His grandson, Milesius, eventually travelled to this distant land and his descendants became the original Celtic settlers of Ireland. Galician legend also talks of a crossing A Coruña to Cork. Historical fantasy writer Morgan Llewellyn imagines this journey in her atmospheric novel, Bard.

This might seem like a fairytale but there are significant archaeological and cultural similarities between Ireland and Galicia, which point to a clear connection between the regions.

In more recent times, olive-skinned teenagers disembark at airplanes during the summer months, and fill the Irish streets with their rapid-fire conversation. They hang around in groups and board the buses all at once, clogging the aisles and raising the volume immeasurably. Despite having to come to terms with overcast skies and rainstorms in July, overcooked food served at six in the afternoon, and peculiar version of the English language bearing little resemblance to that taught at school, they seem to lose little of their vitality for life.

Of course, the traffic is far from one way. Countless refugees from the Irish weather take their holidays in sunny Spain. Predominantly Irish resorts have sprung up; one example is Santa Ponsa in Mallorca, affectionately known as “Ballymun in the sun” (Ballymun being a high-rise area of Dublin). But increasing numbers of Irish people choose to move beyond such tourist ghettoes and stay for more than their allotted two-week break. The obvious attraction is the climate; when the cold rain seeps into your bones and you are looking at grey skies for the fourth month running, forty shades of green lose their romantic appeal.

But beyond that, the Hibernian temperament seems to find the Hispanic disposition remarkably simpatico. I think it is safe to say that the average Irish person arriving in Mediterranean feels a little less culture shock than his cousin from Britain.

Traditionally, until about the 1990s, Ireland was a place where things happened that bit slower than in the Anglo-Saxon world. West of the Irish Sea and south of the Pyrenees, punctuality is a rare virtue. The Irish family often seems closer to the southern than the northern European model, the Irish Mammy and the Spanish Mamá archetypes bearing an uncanny resemblance. Both have recently experienced the shock of change from a Catholic to a secular society, from pre-industrial to a post-industrial economy, from a rural to an urban culture, from an ethnically homogeneous to a multicultural population.

Then there’s the Irish expression “the crack”, which has its Spanish equivalent in la marcha. Both words sum up a live-for-the-moment philosophy that is both charming and frustrating in measures. ¡Salud! Sláinte! Whatever.