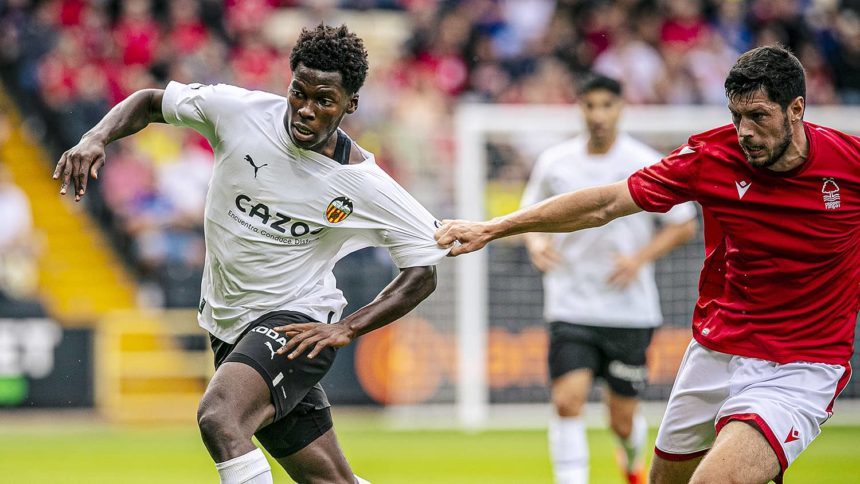 Valencia CF have made a decent start to their tenure under their new manager, Gennaro Gattuso. The signs are already evident from the first four friendlies that the players are beginning to gel and enjoy the tactics of the feisty Italian.

Gattuso’s debut in charge was against the German outfit, Borussia Dortmund, at the Cashpoint Arena in Altach, Austria. A true test, against a side of excellent pedigree, Los Che came through the challenge with flying colours.

As early as ten minutes into the game José Luis Gayà had hit the upright and by the time the interval arrived, Valencia were a goal to the good, courtesy of a deflected shot from Gonçalo Guedes, after good work from new signing Samu Castillejo.

The interval brought with it the customary slew of changes for a friendly, which seemed to distract Valencia more than the opponents. Early in the second half a poor challenge by Thierry Correia in his own penalty area, gave Dortmund a chance to restore parity, and the experienced German international, Marco Reus made no mistake with the opportunity.

Within eight minutes, Valencia were back in front after some slick interplay between Guedes and Soler allowed Marcos André to stab home from close range.

Four minutes later, Guedes secured the points with a peach of a shot that was very reminiscent of the goal he scored at the Mestalla in the 4-0 victory over Sevilla in October 2017.

The 3-1 scoreline against Dortmund was well deserved and was based on the tactics of playing the ball to the feet of players out from the goalkeeper. During the course of the game, Valencia constructed a cluster of passes from one end of the pitch to the other that were pleasing to the eye. If they can repeat this style of play consistently in the league, there will be a lot of happy season ticket holders this campaign.

Valencia’s next friendly saw them return to their Swiss summer camp and play local side St Gallen. Los Che started with a completely different eleven to that which entered the field versus Dortmund, but kept to the same tactical principles of playing out through the goalkeeper.

A relatively quiet first half was brought to life ten minutes into the second period when Koba broke the deadlock with a stunning left foot shot from outside the area, which gave the Swiss keeper no chance.

Valencia’s second just minutes before the end, epitomises the current style of play. Soler cut out a St. Gallen attack in his own penalty area. From that point, the ball did not leave the ground as six more Valencia players contributed to a swift counter-attack that culminated with Guedes firing a shot into the back of the net from just inside the St Gallen box. 80 yards of fluid football with well over half of the side involved.

An early contender for team goal of the season, it will have no doubt helped the season ticket sales, as the game coincided with renewal e-mails being sent out to “abonos”.

The only blip to date on Gattuso’s resume was the 5-2 defeat to Stuttgart at the German’s home stadium. Two more goals for Marcos André were the positive salient points from a game that did expose Valencia’s defensive frailties.

Valencia’s final friendly on foreign soil this season was with one of the newcomers to the English premier League, Nottingham Forest. The Midlands club and Los Che are perhaps most famous for their European Super Cup Final encounter over two legs…that went the way of the Spaniards in 1980. Forest won the first leg 2-1, but Valencia squeezed out a 1-0 victory at the Mestalla, thanks to a Fernando Morena goal, to win the cup on away goals. Valencia’s scorer at the City Ground in the first leg was the Argentinian Dario Felman, and he recounted his memories of the two matches to ‘24/7 Valencia’ recently: https://247valencia.com/when-valencia-cf-beat-nottingham-forest-for-the-european-supercup/

This time, the encounter was played at Meadow Lane, the home of Forest’s neighbours Notts County. Valencia controlled the majority of the game, and it was no surprise when Carlos Soler put the visitors in front just before half time.

As the match went deeper into the second half,  Los Che looked to sit back and settle for the one goal victory. As often was the situation in the league last season, late goals from their opponents denied them victory and points, and this was the case once again, as local boy Brennan Johnson snatched an equaliser with seven minutes of normal time remaining.

Hopefully, Gattuso and his squad will learn from this experience, and find solutions to this weakness before the league campaign starts at home to Girona later this month.

Valencia have two remaining friendly fixtures before the game with the Catalan side, both in the Valencian communidad. The first is in the North of the region, in Castellón, and then three days later Los Che host Atalanta in the 50th edition of the Trofeo Naranja.

The game in the Champions League against the team from Bérgamo in Feb 2019 was labelled “una bomba biológica” by the press of both countries, and proved to be a “super-spreader” of Covid 19 amongst the Valencia squad and travelling supporters on their return to Spain.

Atalanta finished eighth in Serie A last year, so like Valencia will be void of European football this season. Only nine of their entire first team playing roster are Italians, so they will bring a very international flavour to Valencia, with players from Holland, Ukraine, Argentina, Turkey, Colombia and Switzerland all likely to feature at some stage in the annual presentation of the players to Valencia fans.

To date, only two new transfers will be heading onto the Mestalla pitch for the first time in a competitive match when the Trofeo Naranja takes place.

Samu Castillejo has signed on a free transfer from AC Milan until June 2025. He played under Gattuso for a season at the San Siro and has already had playing time for Valencia.

More recently, Brazillian Samuel Lino has signed on loan for the season from Atlético Madrid. The Sao Paulo native arrived at the Wanda Metropolitano from the Portuguese outfit Gil Vicente, a few days before shipping straight out to the Mestalla.

Another Brazillian that is making his home in Valencia next season is Wesley Moraes. In a bit of a coup for Levante UD, he has signed on loan from Aston Villa. As recent as 2019 he was making his international debut for Brazil against Argentina, coming off the bench in a 1-0 defeat, and the same year he was also being transferred from FC Bruges to ‘The Villains’ for a fee in the region of 22 million pounds.

A further shrewd signing for Levante sees the return of Vicente Iborra to the Ciutat de València. After spells with Sevilla and Leicester City, he has returned to his past stomping ground, on loan from neighbours Villarreal.

Jonathan ‘Joni’  Montiel is another player on loan that the club have brought in, and he will leave Rayo Vallecano for the season to help Los Granotas try to return to the top flight at the first time of asking.

Levante have now waved goodbye to numerous first team regulars. Aitor Fernandez, Carlos Clerc, Jorge Miramón, Nikola Vukčević, Oscar Duarte and Morales have all departed in an attempt to cut the wage bill. A pre-season campaign included a 2-1 victory over Wolves at La Nucia, that saw four players sent off (two from each side) and a 4-0 drubbing of neighbours CD Castellón.

They face off against Villarreal in their final friendly before starting their league matches with a home contest against S D Huesca.