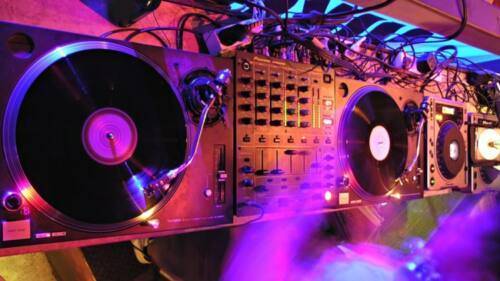 Juanjo Almendral has been an integral part of Valencian nightlife for nearly two decades. Since 1988, he’s run La Marxa, the last call spot in the Carmen for high-energy night owls, and in 1996 opened La Edad de Oro, a regular bar catering more to movida veterans behind Café Lisboa. Those aren’t the only places he’s been involved in, as you might expect of a confirmed nightlife lover, dedicated rocker, deejay, concert promoter, record collector and pop culture fanatic.

Almendral is generous with stories about this hidden history of the Valencia movida…like promoting a Green on Red concert years ago where the police arrived for a mid-set drug raid and lined the entire audience up against the wall as the bewildered band played on. His personal account from an insider perspective offers insights into the constant shifts in the nightlife scene of Valencia and the Carmen…back to the not-too-far-gone days when the Valencia movida as we know it simply didn’t exist.

WERE THERE MANY BARS IN THE CARMEN IN THE ‘80S?

In the Carmen, it begins in the ‘70s. It started in basically two zones: Tiny places began opening in La Xerea that were more for tapas but they welcomed the more cultural and intellectual people of the city. Those places began moving into the Carmen so much that an axis was created between the Plaza Tetuan and the Torres de Serrano or Quart, where you could go have drinks practically on every street. You went in little back streets hitting places and some were more for sangria and foreigners were coming to drink sangria, to get drunk and see Valencia. And there were other places starting the porros scene.

It’s very clear, a definite before and after thing for my generation. In Valencia in the ‘70s, there was a lot of street violence by gangs from barrios that were getting really drunk and looking for girls, fighting among themselves and that kind of thing. But in ’73-’74, still with Franco, hashish and the hippie spirit appears.

It was delayed coming here: peace, love, and let’s not fight among ourselves, that whole idea. It was concentrated in a kind of music, a way of dressing, an aesthetic, a way of doing things. It was really important because this is the moment when the porros came in, the hashish appears and it’s a little bit that whole scenes of sharing and being happy listening to some music. It was with that spirit that the barrio del Carmen was born as a place to go to because places like Genesis or Yes, like Turat, sprang up…there were a lot of them. There was everything from the nationalist side, progressive in that they were listening to that style of music. It was the music of that time and the groups I told you were the names of important pubs. It’s really curious: Yes was on one street and Genesis in the one across from it and the fans of Yes went on one side and fans of Genesis on the other. Even though it was the same kind of music, it was like a friendly rivalry. There was another very important one called Golem created by the brother of Javier Mariscal, the designer of the ’92 Olympics, and this whole artistic movement was concentrated in Golem. That’s where the famous clothes designer Francisco Montesinos appears and a very important artistic nucleus, very underground but with a lot of repercussion in the long run, comes into being there. There was another pub called Siddharta alongside-the name tells you everything- and I was there practically from the time I was 12. It closed many years ago but it was legendary.

Then, like everything, it got out of hand. It follows the same pattern as San Francisco but on the smaller scale of Valencia and several years later. What was peace and love and porros in ’72-’73, became blades, junkies, and smack in ’75-’76. So along with the “freaks” who were coming regularly, people came to beat people up so they could rob them and get enough to shoot up.

The Carmen turned into a nightmare- it was a really dangerous zone. There was the innocence about drugs in that era- remember there was no AIDS then- and people were shooting up as if it was rolling a porro. It’s a little bit of a lost generation because a lot of people died.

What happens? A vacuum, because all those pubs had to close because their regular old clientele couldn’t stand coming because the Carmen now was really dangerous. People lost interest in coming and from ’78 until around ’84-85, there were no more than 3 or 4 places here in the Carmen. In its best moment, there might have been 25 or 30 places, 40 at most. The ones that were left weren’t on main streets of the barrio like Caballeros. They were on really narrow, hidden back streets where renting a place was really cheap. In those days, there was a tremendous confusion in the Ayutamiento. You could open a place and go in and decorate it the next day and they didn’t ask you for a license, not even to do renovations or anything. You went there and took them over and as long as you were paying the rent, no one was going to say anything to you.

So in ’78 people were getting out of the Carmen as fast as they could because it was unbearable. Everybody was going around on heroin, no one had any money, everybody was going around beating people up, the “trippies” were going around flying. There was a void until ’85 and it changed a little because there was a change in generations. And in ’85, the mayor Pérez Casado wanted to push the nightlife to make Valencia a fun place, like the Madrid movida but in Valencia, and that made all this flourish again.