You are here: Home  /  Editorial  /  When It Rains It Pours
Editorial 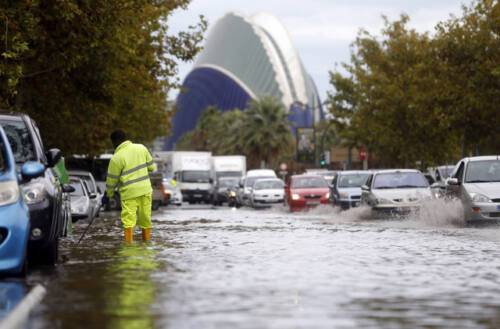 When It Rains It Pours 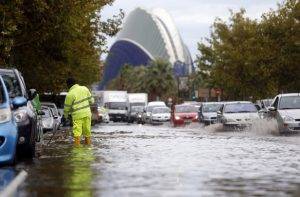 I knew I was making a conscious downshift in lifestyle pace when I settled into Valencia. Part of the city’s appeal was stepping away from that nagging feeling that you’re always missing out on something you should be doing that you can get living somewhere like Los Angeles or London, Madrid or Barcelona. To live in the center city, shop at a Mercado Central, basically take nightlife as fast lane or slow lane as you like,  and no car since you can walk, bike, bus or pop for a 5-10A cab to get almost anywhere seemed like a really good alternative. And it still does.

But even figuring on the downshift upfront didn’t make it any easier, mainly because it’s so damned hard to get any timely information about what’s happening and the peculiarly feast-or-famine nature of Valencian cultural life. Long periods of drought are suddenly broken by brief bursts when you want to be everywhere at once. And you quickly learn from hard experience that if you so much as blink, that window of opportunity can sail right on by.

Because in Valencia, when it rains, it pours. So after months of hardly any local concerts by major artists, there will be nights during the July music festival month when you’ll be forced to choose between Marianne Faithfull and Buddy Guy. And checking the local music scene will pretty much be limited to Thursdays, the designated night on the local circuit for live music.

Because in Valencia, when it rains, it pours. Especially if you only go to original version films with subtitles because seeing an actor on screen with someone else’s voice dubbed in just ain’t right. So, you’re thrilled to catch the quasi-factual depiction of ‘80s Madchester of “24 Hour Party People” or the excellent Brazilian favela street life portrayal of teenage drug trade Godfathers in “Ciudad de Dios.” The the Sex Pistols’ “Filth and Furry” turns up at Filmoteca later that week (find out Friday, one showing Saturday and one on Sunday, rearrange your life accordingly, that’s the Valencian way).

Because in Valencia, when it rains, it pours. And this year’s oscars are on the horizon, which means trips to see nominated Hollywood star vehicles for Jack Nicholson (“About Schmidt,” really terrible) and Selma Hayek (“Frida,” worthwhile, but definitely softened for mainstream consumption).  Posters in the lobby announce the arrival of “Gangs Of New York” another must-see, and “Chicago” too, even though I’m no big fan of musicals. Hey, there’s a “coming soon” trailer for “Far From Heaven” and you know you better move quick to catch them if you can, before the OV subtitled prints go out of circulation.

Because in Valencia, when it rains, it pours. And suddenly possible choices like Kinepolis’ original version showings of “Catch Me If You Can”  or “8 Mile” are out because with so many other options, it’s not worth the effort arranging to get out there (a-ha, there’s one negative to living carless in the centre of Valencia). And the flood of flicks means you’ll probably wind up passing on “Sweet Sixteen” and “Garden Of Happiness” films you’d greet as manna from heaven during the slack movie months.

Because in Valencia, when it rains, it pours. And when you take a Saturday night music break from movie mania, you have to choose between the Flavor of the Month Britpop of Budapest at the Roxy or a rarer night of rhythm music mix by Senegal’s Cheikh Lo at Loco Mateo.

Because in Valencia, when it rains, it pours. And most of Sunday will be taken up by Ripalda-Sogueros’ presentation of their fallera mayor because it’s that time of year again. That pushes back to Monday the intense, neo-documentary “Bloody Sunday” that drops you right in the middle of the confused, close-shot swirl of events on a historical watershed day that most of us English-speakers from across the Atlantic only know from that early U2 song that runs over the closing credits.

Because in Valencia, when it rains, it pours. And we figured Wednesday would be the better night to catch “The Hours” because everyone in Valencia will be at Mestalla or glued to the tele watching the Champions League match with Rome. And it dawns on you that your new little Babel/Albatros card-that “Buy Seven!Get One Free!” deal-is gonna be filled up inside of two months when it took you over a year to get the freebie on the last one. Especially since “The Hours” is so exceptional-the acting, the writing, the directing, you name it- you’re already thinking you have to see it again when you walk out the theater.

Because in Valencia, when it rains, it pours. So you are trying to set up interviews for some vague future date and suddenly the Isabel Julve-Richard Esteve duo are playing Radio City that Tuesday night and you’re set. Even though the timing runs right up against the Jimmy Glass concert by Celia Mur, a singer you were figuring on checking out. Interview didn’t happen (my fault) but it was nice playing club ping-pong between Jimmy Glass jazz and Radio City flamenco on a Tuesday night pouring down rain.

Because in Valencia, when it rains, it pours. Turns out Mother Nature was getting in on the culture act 45 years ago when she dropped an October gota frìa storm on Valencia and sent 3 meters worth of Turia flood waters over the banks and through the Carmen. Apart from wreaking total devastating havoc on the barrio, that 1958 riada prompted the conversion of the empty riverbed into an urban park after the original idea of running a highway through was thankfully shouted down by strong popular opposition. And now in turn it’s being transformed again and promoted as a River of Culture anchored upstream by the City of Arts and Sciences.

Because in Valencia, when it rains, it pours. And maybe nowhere so much as in Las Fallas, when so much happens all at once all the 24-7 time. Fireworks by night and masclets by day and petardos all the puta time, brass bands blaring or drums & reedy doláainas bleating, flower-bearing  Ofrendas or vividly costumed Moros marching, total traffic chaos and pedestrians ruling the central city, bars open until 6 a.m and crem ashes floating down on your head, the total sensory overload for four days that has magically disappeared when you wake up March 20th. Loved and loathed in equal parts by Valencians, it’s the effect abrumadora of Las Fallas, the sensation of being completely overwhelmed. Or you maybe could just say:

In Valencia in Fallas, when it rains, it really pours.