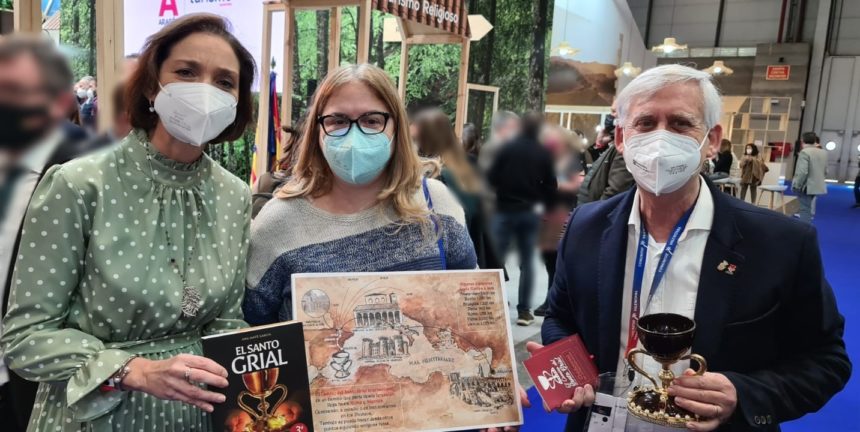 #This year, the 42nd International Tourism Fair (FITUR) was held in Madrid from 19 to 23 January of 2022. It has been a meeting place very well used by the Asociación Cultural El Camino del Santo Grial, “a good start of the year to position Spain” as its president, Dr. Ana Mafé García, says.

This FITUR is a centre  of reunions, reopenings, and restarting businesses and international travel. Its slogan: “We embrace the world. We are tourism” has been supported by a notable presence of exhibitors. Almost 7000 companies and 107 countries have gathered with the intention of accelerating tourism activity. This year, the organisers opted for a face-to-face format, although online formats were also present.

In 2022, the Asociación Cultural El Camino del Santo Grial celebrates its 20th anniversary and representatives of its Board of Directors celebrated the occasion at FITUR. Closing an agenda with organisations that have shown interest in it from different latitudes of the planet. Dr. Mafé together with Mr. Jesús Gimeno Peris, secretary of the Association and member of the Holy Grail Route in the City Council of Massamagrell have held meetings with several of the large companies of the TT.OO. that were attending FITUR. With the aim of positioning Spain as the best tourist destination in the world for pilgrimage.

“Spain is the best place in the world for walking pilgrimages” says Dr. Mafé.

That is why, on the occasion of the celebration of FITUR in Madrid, the Cultural Association The Way of the Holy Grail decided to travel in person to the IFEMA pavilion. Its mission was to give media coverage to the “Quest for the Holy Grail” through its journey within the 56,700 m2 of the fair, represented by all the Autonomous Communities, with a range of Spanish destinations, new companies and an international presence.

The Association’s travel companion, Indiana Tours Valencia, has been a real treat to discover the trials of courage that our heroes must overcome in order to discover the whereabouts of the Holy Grail. In this way, this tour offers an added value to the experience of getting to know Valencia. This has been understood by the professional participants who have shown interest in expanding the offer to show the Way of the Holy Grail, Route of Knowledge, Way of Peace in a more “Hollywood” style.

The representatives of the Way of the Holy Grail had obligatory appointments with prominent personalities from Aragon and the Balearic Islands. At the same time, high-level meetings were held with major businessmen from the sector, who increasingly see a promising future in the development of this product.

The advantage of having the support of the associative network throughout the Grail Territory means that both companies and the people who live in the villages along the ‘Way of the Holy Grail’ are showing more and more interest in promoting it.

Among the sessions held at the venue, it is worth highlighting the meeting with the Minister of Industry, Trade and Tourism, Reyes Maroto. Dr. Ana Mafé García had the opportunity to present her with her signed book “The Holy Grail”, which is a journey into the historical past of the most sought-after relic of the Western Middle Ages. At the same time, it also conveys the attractions of the Way of the Holy Grail.

During the meeting, Dr. Ana Mafé explained to Maroto the main bet of the Association for the promotion of the territory municipality by municipality. Without renouncing the essence of what religious tourism means and its links with nature and historical heritage.

Another key meeting was held on Aragon Day. The event was attended by the Vice President and Minister of Industry, Competitiveness and Business Development, Arturo Aliaga, accompanied by the Director General of Tourism, Gloria Pérez. During their visit, both were able to learn about the promotion of Aragon during these days by the Association of the Way of the Holy Grail.

A separate chapter deserves the great relations that the Director of Tourism, Mr. Idelfonso Salillas has, who knows first hand the twenty years of work that the Association has been doing to promote the value of the Aragonese territory.

“Aragón: Territorio Grial” is a scientific article presented by Dr. Ana Mafé and the researcher Sergio Solsona obtained in 2017 the highest academic award at the International Professional Scientific Congress in Córdoba.

The Association was able to visit the different attractions of the stand, which included a Tibetan bridge, a traditional nabata or a gastronomic space dedicated to the products of the area. The Aragonese stand recreated a village inspired by the small towns that fill the three provinces.

During these days Teruel and Zaragoza have also wanted to be part of FITUR. In the case of Teruel, its town councillor, Javier Rodrigo, was promoting the city and it was possible to make contact with him.

As for the Valencian Community, the Association of the Way of the Holy Grail, with its headquarters in Massamagrell, has been carrying out a great deal of field work in its own territory for many years, joining forces in other communities, including the Balearic Islands and Aragon.

After hundreds of hours of work, we are about to consolidate the route of the Way of the Holy Grail throughout l’Horta Nord, even reaching the Camp de Morvedre with full accessibility. “We still can not give the news officially,” confirms Dr. Mafé, its president.

“We are going to be an internationally recognised community for this wonderful story”, says Jesús Gimeno Peris.

Last but not least, it is worth mentioning the visit of the Board of Directors to the Cordoba stand, more specifically to the representatives of the International Scientific-Professional Congress of Cultural Tourism. Its president, Dr. Mª Genoveva Millán Vázquez de la Torre, from the University Loyola Andalucía, Spain is an authority on tourism. Thanks to this opportunity offered by the best international congress on Tourism in Southern Europe, the Holy Chalice of Valencia is promoted as the focal point of the Holy Grail Route, the Route of Knowledge, the Route of Peace. An object that already had in the last Jubilee Year, a prominent role at the table of papers on Religious Tourism.

Dr. Mª Genoveva Millán Vázquez de la Torre, president of the Honorary Committee, explained that “the aim of the congress is to improve and share knowledge, explain experiences and promote cooperation between the academic and professional worlds, which will allow us to establish collaborative contacts and encourage the creation of networks between researchers and the business world at a national and international level”.

The Asociación Cultural El Camino del Santo Grial wants to put into practice a Code of Ethics that safeguards against any undesirable interference. That is to say, any future action that could compromise the good name of what it means to guard in Valencia the Holy Chalice of the Lord’s Supper, the Holy Grail. The most sought after relic of the Western Middle Ages.

We invite you to request your Pilgrimage Credential and to walk the Way of the Holy Grail, the Route of Knowledge, the Way of Peace. You can do it through the e-mail elcaminodelsantogrial@gmail.com

Holy Grail of Valencia Association: “Remember that on the Way of the Holy Grail we greet each other with Peace and Love, we answer to the Light on the way too!”