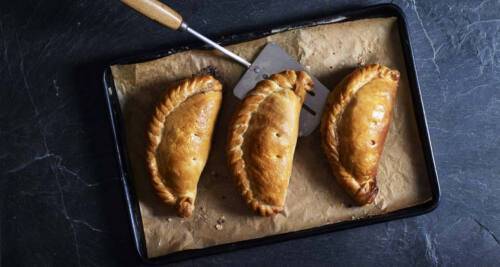 As some of you may know, ‘La Ola Fresca’ was born after I surfed into Valencia on a fresh wave (!), having previously lived on a farm in Cornwall for many years. Apart from surfing, a breathtaking Atlantic coastline and plenty of cider, Cornwall is most famous for the pasty! That’s the ‘Cornish pasty’ of course!

There are references to pasties since the 13th century but it was probably during the industrial revolution when mining in Cornwall (which had existed there since 2000 BC!) reached its zenith, when the 17th century pre-invention of the tuckbox really got underway. It was the ideal way for miners to enjoy a hot, balanced and hearty meal while at work and, by holding the crust at one end, it meant they didn’t eat the lead as well!

The pasty contains waxy potatoes, swede and onion and beef skirt all sliced finely, layered and seasoned with salt and pepper. The raw ingredients are placed on shortcrust pastry that has been cut into a circle, which is then folded over and crimped. Crimping is the complicated part and involves folding the pastry over and pushing down with your finger. The edge should be neat and look a little like it has been knitted in. The average pasty has about 20 crimps. They are glazed with egg and baked in the oven for about an hour.

We can have many arguments about how the influence of the Cornish pasty spread throughout the world with the immigration of miners, “for a mine is a hole with a Cornish miner at the bottom of it”! However, it is probable that in other parts of the world the idea of wrapping pastry around food, from samosas to Jamaican patties to Middle Eastern Börek to empanadas for transporting and preserving flavour, was not singular to Cornwall. What is true is that the pasty has become the national emblem of the county and taken truly to any Cornish persons’ heart as much as or more so than the flag or anthem. The cry “Oggie, oggie, oggie!” now familiar at Cornish Rugby matches is short for hogan or hoggan, said to be the original word for pasty and was chanted as the freshly baked pasties were served down the mine shaft.

Getting hungry yet? On March 5th, it will be St Piran’s day which is National Cornwall day. So, thanks to this recipe for a true Cornish Pasty by Mrs Barbara Tamblyn of Botelet farm.

Method:
Heat oven to 220C/fan 200C/gas 7
Using one hand, rub fat into flour until it resembles fine breadcrumbs, then gradually add water until it forms a firm dough. Cut into four pieces and chill for about 30 minutes to 1 hour. Roll out each piece of dough on a lightly floured surface until large enough to make a circle, measuring 20cm across. Layer filling ingredients, potato first, then swede, then meat and onion. Arrange into a D-shape and wet and pinch with fingers to crimp edge at side. Glaze with beaten egg and bake for 10 mins at full heat, then lower oven temperature to 180C/fan 160C/gas 4, and cook for 45 mins more, until golden.

If you want experience real Cornwall on a beautiful farm Botelet farm in the future: www.botelet.co.uk