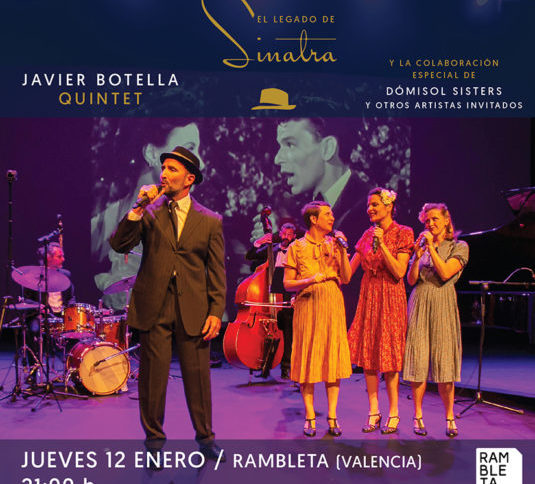 ‘My Way: The Legacy of Sinatra’ at ‘La Rambleta’ on January 12th

La Rambleta cultural centre (Valencia) begins the year with good music on January 12th at 9:00 p.m. with the musical show ‘My Way: The Legacy of Sinatra’, a very special concert that gives recognition to the great voice of the 20th century, Frank Sinatra, directed and produced by the Spanish crooner Javier Botella. Lovers of good music have an inescapable date with this show that will not leave the public indifferent. “ It is not a typical musical, it is a show about the great Frank Sinatra, in a staging that includes more than 20 live songs backed by audiovisuals, with the projection of videos on a large screen on stage about the life and work of ‘ The Voice’, as well as other protagonists of the time ”, explains the artist Javier Botella.

‘My Way’ is the title that gives its name to this show and is considered the most covered song in history. The show will also feature well-known themes such as ‘ New York, New York ’, ‘ Fly Me to the Moon ’, ‘ Strangers in the Night ’ or ‘ That’s Life ’.

The velvety voice of Javier Botella and the group Dómisol Sisters will accompany, with their harmonious voices, the interpretations of this select repertoire. Also, the show is joined by a band of musicians on stage, a dance couple that will transport viewers to the best years of swing and some exceptional guests from the national and international scene such as pianist and singer Albert Sanz or singer-songwriter Litus, among other surprises to confirm.

“It is a pleasure to have this great team, we will also have luxurious collaborations for this first concert of the year. We hope 2023 will be the year of Sinatra”, says the Spanish crooner.

A unique show recommended for all audiences, lovers of jazz and Frank Sinatra songs, as well as for youngsters, for one of the concert’s intentions is to claim this valuable legacy for the new generations. Here is a  good gift that the Three Kings can grant to you and your loved ones. Tickets can be purchased on the La Rambleta website: http://es.larambleta.com/eventos/ver/my-way-el-legado-de-sinatra