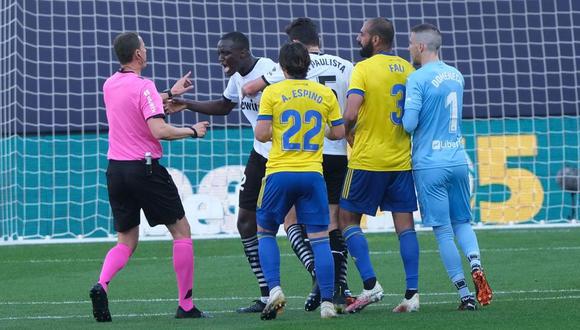 VALENCIA CLUB DE FÚTBOL: “LaLiga has sent us the reports and results of its investigation into the racist attack suffered by Diakhaby and has also explained the methodology used to carry it out.

According to the video and audio evidence available, the investigation cannot confirm “ALL” of the words that Diakhaby heard in the 28th minute of the Cádiz CF-Valencia CF match last Sunday. The fact that no evidence has been found does not mean that this did not happen.

Valencia CF would like to emphasise that LaLiga has carried out its own investigation, but in no way does the Club change its opinion on what happened during the match and maintains its full support for Diakhaby. Our aim is to see a change, to see an appropriate response to this very serious incident, to see movement to change regulations and attitudes in dealing with these kinds of problems whenever they arise.

Without prejudice to the fact that it has not been possible to confirm the full facts that are the subject of the investigation because there is no full recording of the incident, we emphasise that LaLiga has tried to clarify what happened in Cádiz.

Valencia CF also welcomes the fact that talks have begun to establish new protocols to tackle racism in football. We are very proud of Diakhaby, the captains, the players, the coach and his technical staff for their reaction during the game against Cadiz.

It was an unprecedented episode in football, but we are convinced that it will serve to push for a real change in the rules. At this point it is necessary to continue working with LaLiga, the institutions and the rest of the clubs to ensure that this type of racist incident is never repeated.